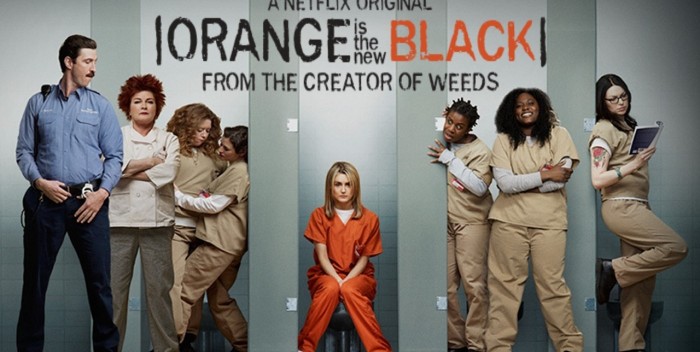 Overnight tonight, “Orange is the New Black” returns to Netflix with 13 episodes. We saw the first one tonight at a cast screening and a hot after party at the Boom Boom Room– er, Top of the Standard. Rosie O’Donnell dropped in to congratulate the cast. From what I can tell, this season will be akin to the “Veep” Renaissance going on at HBO.

Andrew McCarthy — of “Brat Pack” fame– directed this episode- his 9th so far for this series, and did a terrific job. All the regulars are back and there are some new characters. But the main newbies are Brad William Henke as Desi Piscatella, a new prison guard who will be terrorizing everyone, and Blair Brown returns as Judy King, the Martha Stewart character who will now do time in Litchfield.

And yes, we still have what’s become this all star regular cast of Uzo Aduba, Kate Mulgrew, Lori Petty, Taylor Schilling, Lea Delaria, Danielle Brooks, and Laura Prepon. The main story picks up where Season 3 ended, with the women having escaped the prison for a romp in the lake. Prepon’s Alex is in trouble but is saved quickly by Petty’s Whitehill. Not to give a spoiler, but let’s just say they turn into real cut ups. Petty steals the episode.

Show creator Jenji Kohan, who also created and wrote “Weeds,” comes from a comedy family. Her father, Buz Kohan, is a legend in Hollywood: he wrote 110 episodes of the Carol Burnett Show. He also wrote countless Academy Awards shows and TV specials for every major star from Frank Sinatra to Richard Pryor to Cher to Bette Midler and so on. Her brother David created “Will and Grace.”

I asked, Do you have Passover seders together?

Do you get all the way through them, I wondered? They must be hilarious.

She said, “They’re not as funny as they should be, believe me.”

But “OITNB” is, and I’m glad I’m all paid up on Netflix. It’s going to be a weekend of being watching!