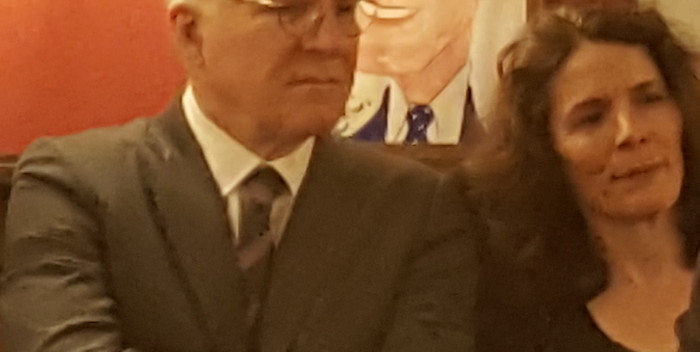 Steve Martin has been connected to Broadway for 40 years. But, he jested at Thursday’s Outer Critics Circle Awards, he still has no caricature on the wall at famed Sardi’s restaurant. The OCC pre-theater dinner was given at Sardi’s, which made Martin’s observation all the more trenchant.

Still, he and Edie Brickell won $1000 from the OCC for Best New Musical for their show, “Bright Star.” When the $1000 award was announced the star-studded audience laughed. After all, Martin — a movie star, novelist, and playwright– has one of the best art collections on the West Coast, maybe in the whole USA. Edie Brickell, a pop and Americana star, is also Mrs. Paul Simon.

What will they do with it, I asked Steve? “We’ll donate the money to charity,” he said.

As for the caricature, when the pair returned to pick up another award later on, Martin quipped: “It’s been 45 minutes and I don’t see any changes.”

The caricature issue was timely as famed “Fiddler on the Roof” lyricist, Sheldon Harnick, who’s 92 and hilariously sharp, sat under his own drawing from about 40 years ago.

“Hamilton” was excluded from the OCC because it swept last year during its Off Broadway run.

Fans of FX’s “The Americans” will be happy to know that Langella is in negotiations for the fifth season.

David Rockwell, who’s like a rock star in the design world, said his win for Best Set Design for “She Loves Me” is his first ever Broadway prize. (Amazing since he’s been a Tony nominee many times in the past but never a winner.)

Harnick accepted kudos for Lifetime Achievement (he has two shows on the boards right now– “She Loves Me” and “Fiddler on the Roof”). He got a standing ovation and said, “If I didn’t deserve it would be embarrassing.” He added that all this attention would help him get his next show financed.