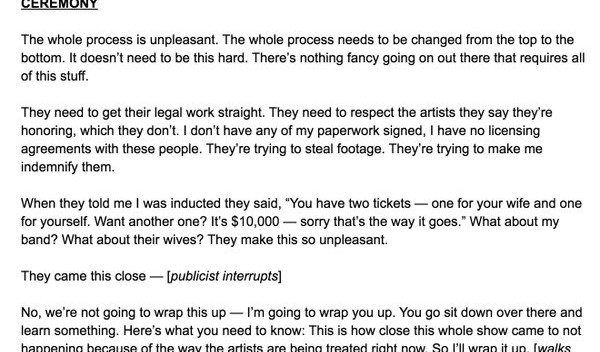 Steve Miller did the right thing last night. He spoke up about the shabby treatment of the inductees at the Rock Hall of Fame, the licensing agreements, etc.

The reason former inductees NEVER return to the Rock Hall induction ceremony is because there are no free tickets. Well, there are SOME free tickets– for big rock stars who are friends of Jann Wenner like ex Beatles or Stones, if Bob Dylan wanted to come, and so on.

But for regular musicians who’ve somehow been inducted, they must pay and pay and pay.

If you perform on the show, the Rock Hall expects you to sign over the rights to the performance gratis, in perpetuity. This was a big issue from the 25th anniversary show at Madison Square Garden. Those performances were turned into a DVD box set. Many of the artists held up the release so they could get their royalties.

The Rock Hall Foundation puts on that concert every year– not the museum in Cleveland. The Foundation pays it CEO Joel Peresman over $400,000 every year. It gives no money to indigent artists, doesn’t help anyone, doesn’t even donate money to MusiCares. They are loathed by other music foundations.

This year no women, no R&B (black) stars from music’s legacy, no instrumentalists or sidemen or producers were inducted except for Bert Berns. The only black people inducted were from NWA. They may not have performed when they were told the licensing would be turned over to the Rock Hall. Dr. Dre and Ice Cube are too smart, and they don’t care about the repercussions.

That the members of the Steve Miller Band and their spouses, nor any other Steve Miller guests were given tickets is typical. There are countless stories every year of people being snubbed, or treated like dirt, by Wenner, or Peresman. There was some control over this when Ahmet Ertegun was alive. But since he died, Wenner has just run it the way he wants to. There are no checks or balances.

So bravo Steve Miller. He did the right thing. He told the truth about what goes on. And just think: he’s been eligible since 1990. He had to wait 26 years. Chicago waited 21 years at least. Deep Purple, too. Cheap Trick, since 2005. They watched Wenner’s pets leapfrog over them. How can they take this seriously?

Still not in the Rock Hall– oh forget, you know, you’ve been told a thousand times.