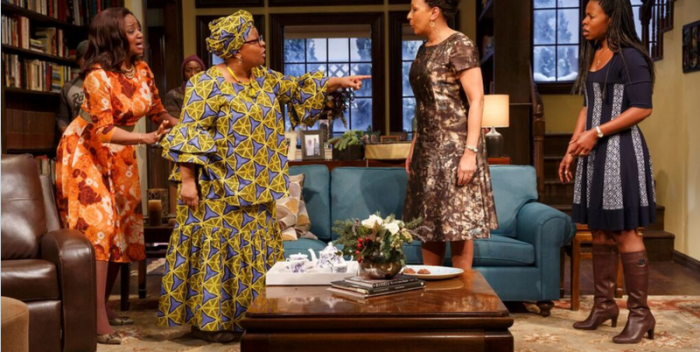 Run, don’t walk, fight to get into the last weekend of Danai Gurira’s “Familiar” off Broadway at Playwrights Horizons.

Tamara Tunie (you know her from “Law & Order” and “As the World Turns”) is exceptional and leads a stellar cast in this dramedy about a Zimbabwean family transplanted to Minnesota.

Tunie plays an MIT schooled physicist named Marvelous– and indeed, Tune is marvelous as the mother of a would be bride who has to face up to her family’s past even though she has done everything to assimilate as an American.

Gurira already has a play on Broadway– “Eclipsed” starring Lupita Nyong’o– and she’s likely to win the Tony and some other prizes for it. Television audiences will know her as Michonne from “The Walking Dead.”

Gurira was born in Iowa but her family is from Zimbabwe so yes, “Familiar” is autobiographical. She is represented in the play as Tunie’s youngest daughter, Nyasha, played by Ito Aghayere. And the play is just like Arthur Miller or Eugene O’Neill in that it illuminates the struggle of immigrants, the fight for assimilation vs. tradition. Once it was about Jews, Irish and Italians trying to fit into the U.S. It’s about time we heard from more recent generations of emigres. It’s a universal theme.

As with “Eclipsed,” “Familiar” jumps off the stage as a piece of real, exciting theater because it takes us someplace unique, where we have not been. Plus it introduces a talented cast you’d like to see move to Broadway rather than disband– it reminded me of seeing “Vanya, Sonia, Masha and Spike” at Lincoln Center and knowing it had to be moved also. Plus there’s a wonderful set by Clint Ramos you don’t want to miss.

Kudos to director Rebecca Taichman. And shout outs to Broadway vet Myra Lucretia Taylor, Roslyn Ruff, Melanie Nicholls-King, Harold Surratt– as the family– and Joby Earle and Joe Tippett as their prospective in laws. But really, Tamara Tunie– four star performance. Manhattan Theater Club– take them in. There are colors here we haven’t seen before.