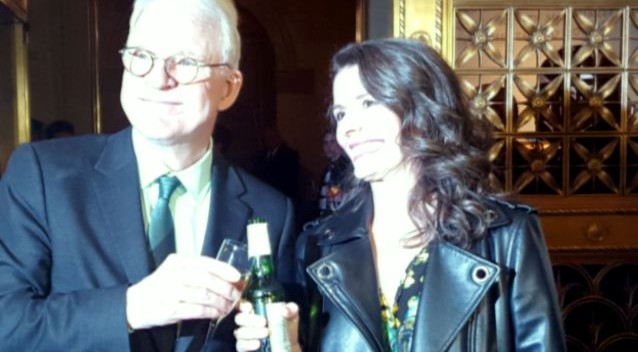 So yes a star studded crowd came to see what Steve Martin and Edie Brickell have been up to for the last three years with “Bright Star.” Their bluegrass Broadway musical finally opened, directed by Walter Bobbie, music supervised by Peter Asher.

And the good news it’s all good news. The songs are lush and catchy, the performers are spot on. The show has a real star in Carmen Cusack, who — if you closed your eyes– could be a country superstar from Nashville. In fact, if “Nashville” comes back to TV this fall, the shows should cross-promote.

“Bright Star” however is set in and around Asheville, North Carolina just after World War II ends, and also about 23 years earlier. The people dress like they’re in “The Waltons.” There’s a lot of flannel, a lot of gingham, hats, gloves, fussy old fashioned furniture. It’s the world of Thomas Wolfe, and Carson McCullers, and Eudora Welty. The whole thing could be a novel from Algonquin Books.

Luckily. the songs are strong given Steve Martin’s banjo interests of the last 40 years and Edie Brickell’s ability to write hooks (go back to her lovely albums with the New Bohemians– they are full of gems). Plus Steve has taken the sometimes on-the-nose story and peppered it with enough humor to lighten the gloom that threatens to overcome the proceedings like a storm cloud but never does.

But back to the show: we know Steve Martin can play banjo and write music in his sleep. But Edie Brickell went into low profile mode after she married Paul Simon in the early 90s. What a pleasure to have her back. A lot of the songs in “Bright Star” are eminently hummable and should be covered by real country stars. “Always Will,” “Asheville,” and “At Long Last” are all hits.

The cast is top notch, from Carmen Cusack to the much too modest Dee Hoty. Paul Alexander Nolan is one of Cusack’s two leading men– he comes to us from “Dr. Zhivago” and A.J. Shively hold up their end for the guys admirably. Emily Padgett kind of steals the show in the supporting category– too bad she’ll have to go up against Jane Krakowski and Jennifer Hudson this year at the awards shows. That will be a hot category.