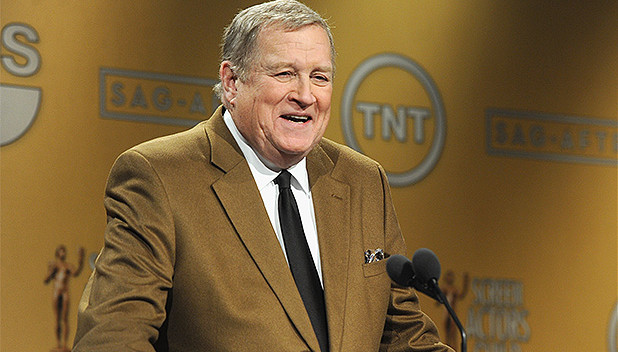 What a shame. Ken Howard, president of SAG-AFTRA, star of TV’s “White Shadow,” has died at age 71. He was just the nicest guy in the world. He was also a Broadway star, having a huge long resume that included the original “1776” and “See Saw” with Michele Lee. He had a long list of movie credits too including most recently “The Judge.”

You might not know this but among Ken’s ex wives were “Days of Our Lives” actress Louise Sorel, and Margo Howard, daughter of Eppie Lederer aka daughter of Ann Landers and niece of “Dear Abby” Abigail van Buren.

Condolences to his family. He really was a swell guy. I saw him at the BAFTA tea in January, and he was gregarious and open and friendly as usual. He will be missed.

Here’s the release from SAG:
We are deeply saddened to announce that SAG-AFTRA President Ken Howard passed away today.

Ken was an accomplished actor, author, teacher and unionist whose steady leadership as president of Screen Actors Guild positioned him to guide the union’s historic 2012 merger with American Federation of Television and Radio Artists. In addition to his many professional credits, awards and other laudatory work, he led the union for nearly seven years and was devoted to the interests of its membership.

SAG-AFTRA Acting President Gabrielle Carteris said, “Ken was an inspirational leader and it is an incredible loss for SAG-AFTRA, for his family and for everyone who knew him. He was a light that never dimmed and was completely devoted to the membership. He led us through tumultuous times and set our union on a steady course of excellence. We will be forever in his debt.”

National Executive Director David White said, “Ken was a remarkable leader and his powerful vision for this union was a source of inspiration for all of us. He was an exceptional person and we are deeply saddened by his passing. He had a remarkable career and he never forgot what it was like to be a working performer. The merger of SAG and AFTRA was something of a “North Star” for him and, once he fixed upon it, he never wavered from that goal. My heart goes out to his loving wife, Linda, and to their family. He will be deeply missed.”

Ken leaves a legacy of service, commitment and superlative success. He was an extraordinary actor whose career spanned Broadway, motion pictures and television. He was a Tony and Emmy Award winner and is best remembered for his groundbreaking network series “The White Shadow.”

Ken was elected to the national board of directors of Screen Actors Guild in 2008 and to the SAG presidency in 2009. He served two terms and was widely viewed as the leader of the 2012 merger that created SAG-AFTRA, ensuring meaningful representation for nearly 160,000 actors, broadcasters and recording artists now and into the future. He was appointed co-president upon merger and in 2013, became the first elected president of SAG-AFTRA and was reelected in 2015.

He led numerous union committees including chairing the television and theatrical negotiating committee through several rounds of bargaining resulting in nearly $1 billion in gains for members.

He was a hands-on leader and worked closely with national executive director David White in returning the union to fiscal stability. Howard was recognized with the George Heller Memorial Gold Card in 2015 – the union’s highest service honor, and in 2013 received the Leadership Recognition Award for his work on merging the unions.

Ken was active in the International Federation of Actors and served SAG-AFTRA and the national labor movement as vice president of the American Federation of Labor-Congress of Industrial Organizations (AFL-CIO) and the Department of Professional Employees, AFL-CIO.