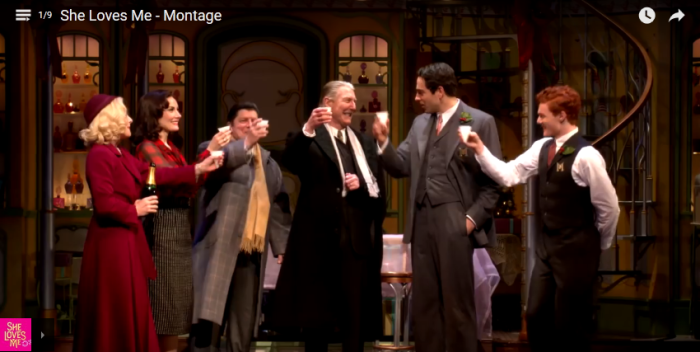 Broadway musical revivals? The race is on, with “The Color Purple” and its stars Cynthia Erivo and Jennifer Hudson getting hot competition. Laura Benanti is sublime and Jane Krakowski is a wow in “She Loves Me,” which opened Thursday night.

This is the Sheldon Harnick and Jerry Bock wrote the year before “Fiddler on the Roof” put them on the map as legends. It’s not performed often, and actually, this may be the production ever. The ensemble cast is sensational, starting with TV’s Zachary Levi making his second Broadway performance. He’s an old fashioned leading man, it turns out. The rest of the cast– Gavin Creel, Byron Jennings and most especially Peter Bartlett among them– are the kind of Broadway dream team you didn’t think existed anymore.

Now what of Jane Krakowski, who should really star in her own Broadway show? She’s been at it since she was a kid in “Annie” and “Search for Tomorrow.” Then she turned out to be Tina Fey’s secret weapon in “30 Rock” and “The Unbreakable Kimmy Schmidt.” She has amazing comic timing, a voice that doesn’t (shouldn’t) stop, and legs that go on forever. She shouldn’t always be a second banana, an Ethel or a Rhoda. But she’s a perfect one here. And her show stopping “splits” are a new wonder of the world.

And if Krakowski is Rhoda, then Laura Benanti is Mary. As Amalia, she dazzles and is sure to win — or get very close– her first lead Tony for “She Loves Me.” Benanti has been so much on Broadway that I had to look up her age. She’s only 36! She glows in this production just as she did in “Gypsy” when she won her Tony for supporting actress in a musical. She’s a star but plays well with others– she is very much part of the ensemble, occasionally stepping out for a star turn. And when she does…well, you really float out of the theater as Amalia finds love.

PS You may recognize the plot of this musical: it was based on the classic film “The Shop Around the Corner.” In our lifetime the movie and the musical were the foundation for Nora Ephron’s great comedy “You’ve Got Mail.” Jimmy Stewart and Margaret Sullavan were the original lovers in the 1940 film, succeeded by Tom Hanks and Meg Ryan. Levi and Benanti uphold the legacy with aplomb. And how much of a dream is the story of two lovers who work in the same shop, think they hate each other but turn out be lonely hearts pen pals? The story is set in 1937 Budapest with no mention of the impending World War. It’s a lovely fantasy.