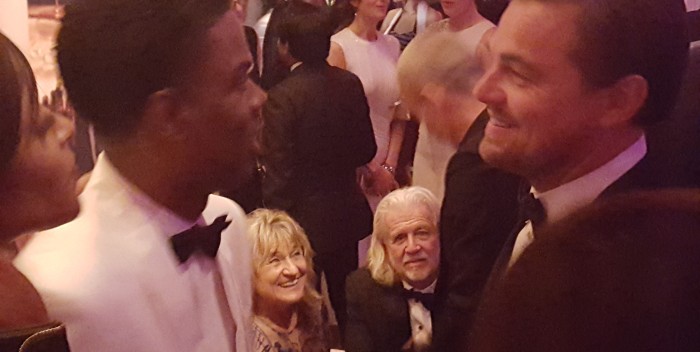 Basically, Vanity Fair’s annual Oscar party was rocking when I arrived at 11:30pm from the Oscar show and Elton John’s amazing $6.2 million fundraiser. And the Vanity Fair party was still rocking when I left at 2:30am. For all I know, every A list star in Hollywood is still inside the gi-normous single room tent on Santa Monica Boulevard next to the Annenberg Center, dressed in formal wear, eating In and Out Burgers, vaping, gossiping, and hooking up.

The first people I saw had arrived almost simultaneously and I was sucked into their vortex: show host Chris Rock, who looked he had PTSD, and Leonardo Di Caprio, who was very Gatsby as everyone in the room rushed over (you could feel it tilting) toward him to see his long awaited Oscar. His mother and her husband were with him. You can see them (sitting) in the photo I took of Chris and Leo meeting after leaving the Rome Colosseum– er, Dolby Theater.

After a bit of mugging (male hugging), Chris sat down on one of the modular white sofas in our area, eyes wide shut and hollow. He’d just come from the Governors Ball and looked shell shocked. Are you alright, I asked? He nodded. I assured him the night had gone well, and that the reviews would be good. (They were but the ratings were terrible– but that had to with the movies, not the Oscars show.)

What was his favorite part, I asked? He said, “Once I made it past the monologue, nothing else mattered. It was all a blur.” Indeed, he handled the whole massively complicated enterprise with aplomb and still came off very funny. I said, “Jada [Pinkett] can take it,” referring to his joke about her. Chris said, “Well, it’s true he got $20 million for Wild Wild West!”

I like Leo’s style when juggling his long ago divorced parents, by the way. He parked his mom at the Vanity Fair party, and gave his dad and his wife tickets to the Oscars. I walked the red carpet with George DiCaprio, who told me: “I think Leo will take a break now and focus n environmental issues. He deserves a break.”

Just to give you an idea of how bizarre it is to see 500 famous people at the same time: into this little Leo scrum came someone I recognized but hadn’t seen in some time: magician David Copperfield. And then the famed director of “The Insider” and “Heat” Michael Mann.

The Vanity Fair party is the only place where you will see Ben Affleck and Jennifer Garner, who are divorcing, as well as Matt Damon (and his wife Lucy) all talking together like nothing is amiss. I ran into Justin Timberlake (who put me in headlock) and Jessica Biel, Anthony Mackie and his super manager Jason Spire, and then sort of a flood of people from all corners of show biz including Sean Puffy Combs, turned out in a tuxedo (he is the David Dinkins of hip hop) to the very pregnant friends Anne Hathaway and Emily Blunt, who became famous as co-stars in “The Devil Wears Prada” and are still best pals.

“Look at us!” exclaimed Anne, who is ready to go in May. “You didn’t know what strong women we are!” The two gals cracked up laughing. Oh boy!

Back in the main room there were plenty of reunions, celebrating and some grieving. The latter came as Lady Gaga, fiance Taylor Kinney, and songwriter Diane Warren rolled in after inexplicably losing Best Song to the watery James Bond theme sung  by Sam Smith. Gaga was philosophical– her performance, with Veep Joe Biden and fifty rape survivors sent a powerful message. But after 8 nominations, Diane Warren would like her statue already.

Then  there was Sylvester Stallone, who everyone, including me, thought was going to win his Oscar after 40 years. He lost instead to Mark Rylance, Britain’s most famous theater actor. There I was consoling Rocky Balboa. “I have my theories,” he said. We agreed, on to bigger and better things. But I’m told Stallone didn’t feel he had the financial support from MGM in ads or screeners, and that he paid for a lot of his Oscar campaign himself.

Yes, I did listen in while Roger Federer and Serena Williams talked tennis. And I did sit and chat with 87 year old Martin Landau about all the movies he’s making now. Nick Jonas told me he’s starting to plan his new album. So did Mr. Timberlake. I ran into a crush of New York types (Paul Dano, Jon Hamm, Hamish Linklater) and hung out with Sissy Spacek and her legendary production designer husband Jack Fisk. I asked Fisk if he really knew Terence Malick, who he’s worked with since the 70s. “Do you ever actually see him?” I asked. He laughed. “Oh yes! He just doesn’t like the press.” No kidding.