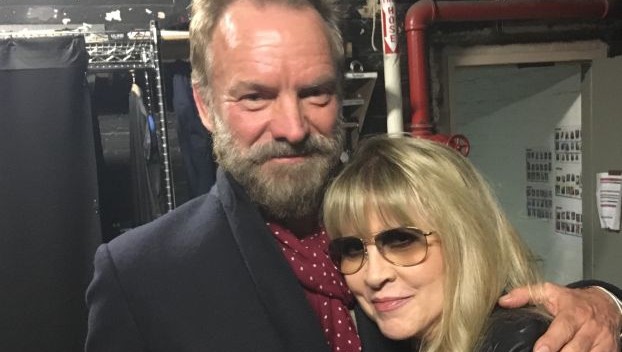 UPDATE MONDAY DEC 7: Stevie says she’s going to work on several “Solo” projects before a Fleetwood Mac album. Mick Fleetwood is working on a Fleetwood Mac project of some kind without her. Rumours! It’s all “over my head” at this point.

SUNDAY NIGHT DEC 6 So: Stevie Nicks and Mick Fleetwood were at the Broadway premiere of “School of Rock” Sunday night. Why? In the movie, Stevie’s “Edge of Seventeen” is cited and sung. In the musical, too. Big discussion of Stevie and Fleetwood Mac in the show, which got a lot of laughs from people in the audience who knew they were in attendance.

Backstage, Stevie told me the first time she knew “Edge of Seventeen” was in the movie, she was at home by herself with Sulamith, her hairless Chinese Crested, and watching TV. “I couldn’t believe it,” she said, “and I had no one to share it with but her.”

Stevie told me that Fleetwood Mac’s long world tour is finally over. Now they will undertake a new album. Not just the four songs they released for download in 2014. “A whole album, we have plenty of songs,” she advised. This will be most welcome. Their last album came out in 2003, before I was born.

I also met the great Mick Fleetwood for the first time ever. He is very tall and extremely nice, with long gray hair tied into a pony tail and a matching beard. We talked about the pre-Lindsay Buckingham-Stevie Nicks pairing coming to the Mac in 1977 for the self titled album that launched a mega career for the group (and went on Rumours, Tusk, and everything since then). Do you go back as far as [original member] Peter Green, Mick asked? I do, I told him, and we talked about “Bare Trees,” “Heroes are Hard to Find,” and “Hypnotized.” Mick was surprised that I knew Peter Green wrote Santana’s hit “Black Magic Woman.”

Sting, who’d really never met Fleetwood, said he went back to the Mac 1968 hit “Man of the World.” Fleetwood was impressed. I think he was impressed we knew that Fleetwood Mac started out a blues band.

Also PS I did ask Stevie why the original “Buckingham Nicks” album has never been on CD. It remains one of the few oddities of the rock era still only on vinyl somewhere (like my record bin). Mick chimed in “It got them the gig.” That was FORTY years ago. Well? “The real answer is, I don’t know,” said Stevie.

So much for that.