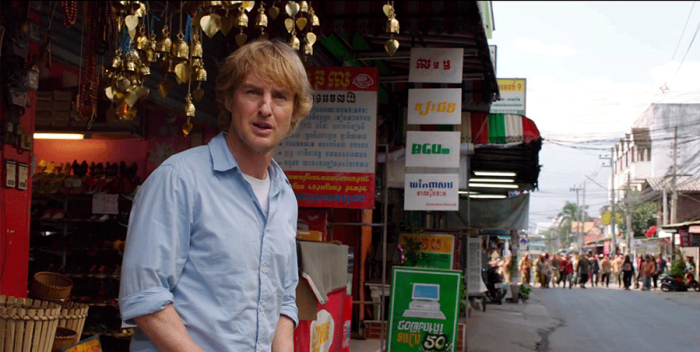 Monday night: a private, advanced screening of “No Escape,” a hot little action film that opens Wednesday. Owen Wilson stars, Pierce Brosnan has a juicy extended supporting part, Lake Bell acquits herself beautifully. This is an edge of your seat movie, totally engrossing and wholly entertaining. You will also never again visit a country where there’s any chance of revolution.

Harvey Weinstein hosted the gathering, preceded by cocktails and shmoozing. Tom Brokaw, looking very well for a man who is battling cancer, walked in by himself. Some other luminaries included actor Luke Wilson, who came to support his brother, trumpet man Chris Botti, the famed songwriter Valerie Simpson, NY Times writer Nick Kristoff, movie producers Holly Wiersma and Celine Rattray, and the great musician ELEW aka Eric Lewis. Magician David Blaine arrived with Guy Oseary, manager of U2 and Madonna.

Harvey introduced Owen, Pierce and Lake, and talked about their hectic shoot in Thailand. “We told them were making a movie about Cambodia,” he joked.

I asked Owen about that news that his dad, Bob Wilson, the great former PBS exec, has Alzheimer’s. He told me that this actually began about three years ago. The news breaking last week was old news to him, his brothers and mother, who have pulled together. It’s a tragedy for the Wilson family as the brothers continue to rack up career successes.

Last week our Leah Sydney checked out producer Gary Walters’ screening of “No Escape” in LA, by the way. She reports:

Producer Gary Michael Walters, CEO of Bold Films, hosted a screening at UTA in Beverly Hills of his newest film, “No Escape,” which could be a sleeper hit of the late summer for The Weinstein Company. Gary, the accomplished son of the one and only legendary publicist Norby Walters (known in Hollywood for his famous poker games and his annual Oscar “Night Of A 100 Stars” gala) was with his lovely wife Irene cheering their son from the last row. They should be proud, Gary has terrific taste; he executive produced the terrific “Night Crawler” and “Whiplash.”

Now add “No Escape” to that list. Co-written by the brothers John Erick Dowdle and Drew Dowdle and directed by John, it’s a story that we’ve seen before, but never like this, it’s executed practically perfectly. The film opens with a normal family, Owen Wilson, (Jack Dwyer) who is one of the most likable actors on the screen, Lake Bell, who plays his wife Annie with as much appeal as Owen, two terrific young girls, Claire Geare and Sterling Jerins, who play their children, all flying to their new home overseas (the film was shot in Thailand) where Dad is about to start a seemingly swanky job. They quickly get caught in the middle of a surprise coup, and the rest of the film is their harrowing adventures to escape. What the Dowdles do so well is from the opening scene, you are tethered to the emotional journey of this family.

The actors, including a terrific Pierce Brosnan, are as authentic as they come. John Dowdle paid tribute to Gary before the screening by telling the crowd, “We were working on this for years, it was a cursed production until we came to Bold, Gary changed everything.” Lake Bell then followed him by saying, “I just want to say, I’m sorry and you’re welcome.”

John told me that, “At one point the Thailand government shut us down because they were worried we’d set off the real thing.”

Dowdle lavished praise on his cast. He said, “Lake is an actor everyone loves, from the crew, to the audience. She is exactly who she appears to be. “ He lavishes praise on Owen as well. “We’ve just seen a sliver of what Owen can do.” What that also means is that Owen was more than keen to do his own stunts, which had John worried to say the least. He explained, “Owen did pretty much his own stunts. There were times I had to go to his trailer and say ‘please, you have to wear a harness, it’s not safe.’ He was actually willing to do it without. I told him, ‘Hey, I can’t afford to lose a day or you on this production.”