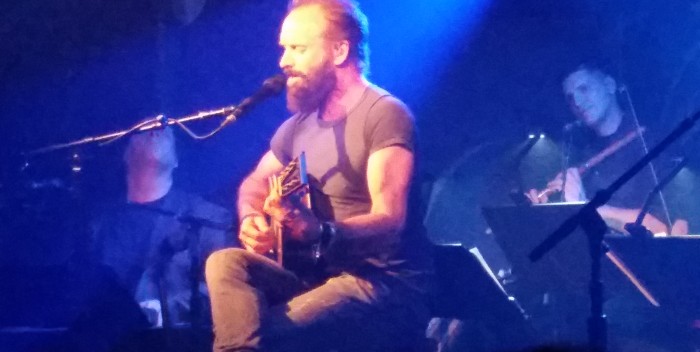 Sting is back from his world tour with Paul Simon, which followed his run as actor/composer of Broadway’s “The Last Ship.” So what did he do last night? Perform most of the songs in a pared down version of the show, two performances, for The Actors Fund at the McKittrick Hotel (home of “Sleep no More”).

The rocker turned Broadway composer has a Tony nomination for Best Score of a Musical, and could actually win– and should. He’s up against the fun but “Spamalot”-like “Something Rotten” (funny songs, but no keepers), and “Fun Home” (sad songs that sound like Sondheim-lite).

Hearing the songs from “The Last Ship” a few months after it closed was like meeting up with old friends. The title song is so catchy you can’t get it out of your head. Same for the great stomping “What Have You Got?” (not the real title, but that’s what I call it). The lush ballads are just gorgeous– from “What Say You Meg” to “The Night the Pugilist Learned How to Dance.”

Sting– with the eminently agreeable Jimmy Nail performing, and singing siren Jo Lawry– also added back “And Yet,” a beautiful samba number that was cut after the run in Chicago a year ago. The audience, knowing it from Sting’s album of the show’s songs, cheered when they heard it.

There were two shows last night at the McKittrick. The first one was precise and studied, as musical director Rob Mathes had rearranged the music to fit the small combo on the intimate stage. In between shows, Sting and wife Trudie Styler and a few friends were packed into a small dressing room where they dined on cold chicken and spicy pieces of steak on skewers. Jazz trumpet star Chris Botti stopped by. Hot tea with honey was made with an electric pot and poured into Dixie cups. “The glamorous rock life,” someone quipped.

The second show proved a joyous rave as a gang of “Last Ship” cast members showed up and joined in from the back of the small room as if they were still in the Wallsend bar on the stage of the Neil Simon Theater. The cast is still devoted to the show, even as they look for new jobs. They knew all the words, and sang them with gusto. A couple– husband and wife– just got in as the doors closed. They stood in the back, among the rousing cast. “We thought this would be a bad spot,” the husband observed. He was beaming. “But now we’re in the middle of everything!”