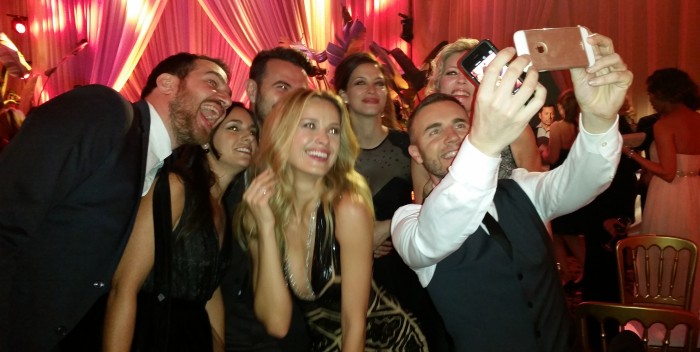 Oscar weekend culminated in the party of parties last night as Harvey Weinstein went into full impresario mode and blew the lid off the ballroom at the swanky Montage Hotel in Beverly Hills. Three hundred guests swanned in to see a workshop performance of a new Broadway musical Harvey’s developing of “Around the World in 80 Days” featuring Tony winner James Corden, UK pop star and composer Gary Barlow, sizzling Nicole Scherzinger, and hot as a pistol singer Rita Ora in a feathered nest of a gorgeous white Marchesa gown. Tony winning director Diane Paulus put the whole thing together with about three hours of rehearsal time!

The 30 minute excerpt of “World” was followed by a break for schmoozing, and then a preview of Weinstein’s musical of “Finding Neverland” featuring performances by Barlow and the show’s star, Matthew Morrison of “Glee” fame. All the songs were knockouts– Barlow’s music is going to a popular sensation on Broadway. Charismatic Morrison should draw huge audiences. Kelsey Grammer, who’s also in “Neverland,” was there with wife Kayte, but preferred to let Morrison show off his chops.

There were business moguls in the audience, too, including Netflix’s Ted Sarandos, Amazon’s Jeff Bezos, Google’s Eric Schmidt, and financier Steven Schwarzman. His son, Teddy Schwarzman, is the popular producer of “Imitation Game.”

How do you know it was great party? Everyone stayed, and stayed, dancing, mingling, eating, shpatzeering, as my grandmother used to say, having a ball. It was buoyant and jubilant, rarities these days.

And now, wearily on to the Oscars, and the Vanity Fair and Elton John galas!