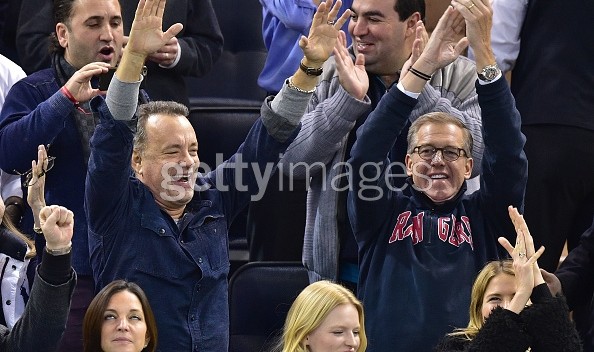 Remember Forrest Gump? He was everywhere in history. Now Brian Williams has become a real life Forest. And so the actor who played Forrest is going to substitute for Williams on David Letterman’s Late Show tomorrow night.

It will be interesting to see how Letterman and Hanks handle the Williams situation. Will they talk about it? And was Hanks selected to help polish up Williams’s tarnished image? It’s no secret that Williams and Hanks are friends. They’ve been photographed together at sporting events. The connection: Hanks’s actress wife, Rita Wilson, plays the mother of Williams’s daughter, Alison, on the HBO show “Girls.”

Back in May 2013, Wilson flew in from New York– where Hanks was on Broadway– to fill in for Williams at one of his many charity hosting duties. This one was for the Gracie Awards, where he was going to present his wife, Jane, with the Outstanding Interview Award for her Educational series on Bloomberg radio. Williams was called away to Oklahoma to report on tornadoes.

Wilson read a message from Williams, who called his wife of 27 years, “my only source of unvarnished truth.” Brian went on to say via Rita: “Jane originated the ‘Making A Difference,’ segment at the end of the Nightly News, no one knows that.”

Williams loves his celebrity connections. He emcees tons of celebrity charity events and often shows up at movie premieres. This is quite unlike the old standard for network anchors. Until they retired, you rarely saw Dan Rather or Tom Brokaw anywhere. Peter Jennings, before he became ill, was never seen at movie premieres. And certainly none of them ever participated in late night follies with Johnny Carson or Leno or Letterman the way Williams has carried on on the Jimmy Fallon shows.