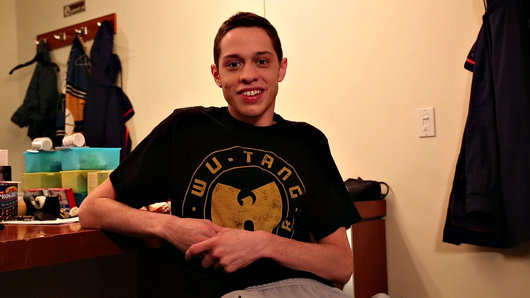 updated “Saturday Night Live” has its latest break out star– Pete Davidson. He just turned 21 on November 16th, making him the second youngest “SNL” cast member ever.  (Readers have told me Anthony Michael Hall was the youngest, at 17.)  He is so young that at dinner Thursday– a small off the record gathering set up by Lorne Michaels– a couple of names came up. One of them was Diana Ross. “Who?” Pete said. I thought he was pulling my leg. A few people around us– other cast members like Michael Che and Leslie Jones– threw out names of some other cultural icons. Sam Cooke? Jackie Wilson? Davidson offered a blank stare. The Beatles? “Yeah,” he cried in his richly nasal Staten Island accent. “I know them!” Like d’uh.

Every time Lorne Michaels launches a new cast, it’s met with criticism and derision. The Post and the Daily News always hate the new people. Now social media only exacerbates the situation. A few weeks later the cast gels, and then suddenly they all become stars. This year was no exception. My personal favorite is Kate McKinnon. She started in April 2012, and I am obsessed with how talented she is. When I met her Thursday night at the Wolfgang Steak House, I think I scared her. Kate, I promise not to stalk you.

In fact, all the new cast members who were at the dinner were a delight. Colin Jost, Cecily Strong, Che and Jones, Davidson, McKinnon, Kyle Mooney. The rest of the cast was rehearsing with tonight’s host, Martin Freeman, or shooting videos. I did get to meet Steve Higgins, who doubles as Jimmy Fallon’s “Tonight” show announcer and a producer on “SNL.” Like Leslie Jones, he’s “of an age,” and adds considerably to the smart tone of the show.

All the really good gossip on Thursday night was not to be repeated, but I did get an earful. None of it would shock anyone. The buzz around dinner was that Michaels– maybe the most savvy and knowledgeable guy at NBC–  is gearing up for the show’s 40th anniversary on February 15, 2015. It will be a big night on NBC. Believe it or not, the last big anniversary show was 15 years ago! “There are so many more people now, hosts and musical guests,” Michaels said. Just a note– in the 25th season Jimmy Fallon was promoted to cast regular. Crazy!