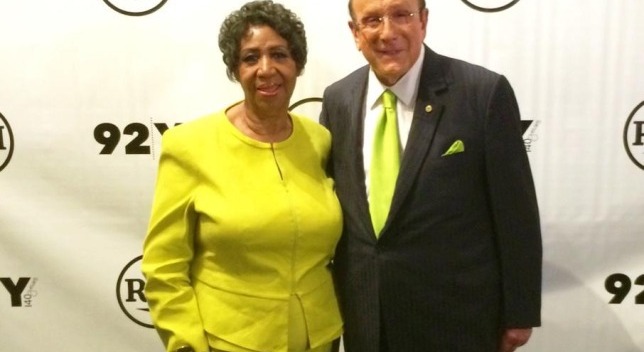 Aretha Franklin is not much for social networking. YouTube is foreign to her. But as of late last night, the Queen of Soul has scored more than 2.2 million views of her cover of Adele’s “Rolling in the Deep.” This includes 1.5 mil of the lyric video and another 750,000 or more of her Letterman appearance from Monday night. Amazon.com has the paid digital download at number 58 and rising fast. And this is all in less than 48 hours.

To commemorate the surprise launch of the single and her new album, Aretha took the stage last night at the 92nd St. Y with record impresario Clive Davis. They were interviewed by the excellent moderator Anthony DeCurtis. In the audience: Valerie Simpson, who co-wrote with her late husband Nick Ashford “Ain’t No Mountain High Enough” and “I’m Every Woman”– both of which are on Aretha “Sings the Classic Diva Songs”– and R&B star Nona Hendryx of Labelle fame.

In front of a packed audience, Davis played cuts from the new album while DeCurtis questioned both of them about their long friendship and collaborations since 1979. Davis, the master showman, walked the audience through the album, explained its provenance, how the songs were chosen, etc. The cheering crowd, which applauded everything, was rapturous about the new songs. We got to hear “Rolling in the Deep,” “I’m Every Woman,” “I Will Survive,” “Midnight Train to Georgia,” and a totally reworked jazz version of Prince (and Sinead O’Connor’s) “Nothing Compares 2 U.”

The best quote of the night: Aretha said, “The music keeps you young.” She cited Adele, Beyonce and Destiny’s Child among her favorites. What makes a singer great? “A passion for the music.”