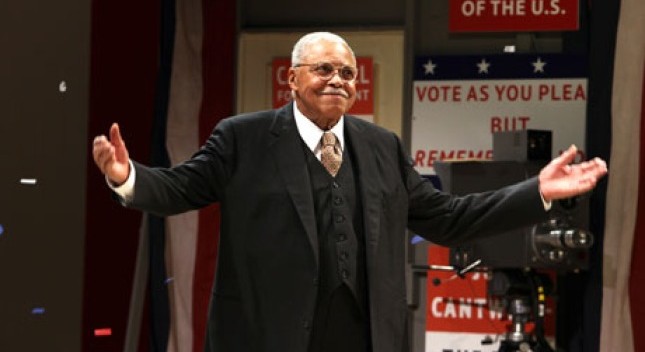 James Earl Jones is only 83 years young. He’s the beating heart at the center of Broadway’s revival of Kaufman and Hart’s “You Can’t Take it With You.” The play, written in 1936 and last revived fondly and hilariously in the 1980s with Jason Robards, Eddie Albert (who took over for Robards), Colleen Dewhurst, James Coco and Elizabeth Wilson, remains a laugh fest- sophisticated and corny at the same time. I have a strong feeling this is going to turn out to be the hit production of the fall among plays. Just you wait. Scott Ellis has taken what is a complicated piece to stage– lots of characters, split second comic movement– and made it run like a vintage Rolex.

JEJ is just one factor, and what a great idea to have him play “Grandpa”–Martin vander Hoff– the patriarch of the extended eccentric Sycamore family and friends. Just as brilliant is Tony nominee Kristine Nielsen from “Vanya and Sonya…” as Penelope Sycamore, Martin’s daughter, who runs her household with ditzy benign neglect. Kristine Nielsen is a genius, folks. Watch her start a line and finish it. In between, she does three other things physically preparing for the line to end. It’s like watching a crazy architect.

The rest of the cast is superb. Aussie Rose Byrne, who’s got a big movie and TV career going, makes her Broadway debut with incredible confidence and poise. She’s Alice, the Marilyn Munster as it were of the Sycamores– Alice is the only one who goes out in the world every day in New York, has a job, a life, and is “normal.” She knows her family is “off,” but she loves them. Byrne starts what should be a nice theater career.

Then there’s Annaleigh Ashford, from “Homeland” on TV and “Kinky Boots” on Broadway, as Alice’s married but way gone sister Essie. Hilarious. Fran Kranz, who was Bernard in Mike Nichols’ “Death of a Salesman” in 2012, and was recently hanged on the “Dallas”  TNT reboot, is a fine Tony Kirby, who woos Alice. Mark-Linn Baker plays counterpoint with Patrick Kerr as respectively Penny’s husband Paul and Mr. DePinna, who’s making fireworks in the basement. Broadway great Elizabeth Ashley waltzes into Act 3 as the Russian countess now waiting tables at Child’s restaurant in Times Square. Reg Rogers keeps the action going as Boris Kolenkov, Essie’s dance teacher.

Lots of stars in the audience– Glenn Close and John Lithgow, who will open soon down the street in “A Delicate Balance,” Tony winner Bobby Cannavale (who dates Rose Byrne), “Charlie’s Angels” star Jaclyn Smith (her lovely daughter dates Fran Kranz and has known him since they were in school), plus David Hyde Pierce and Billy Magnussen who came to cheer on Kristine from their “Vanya” days. Tony nominees Jefferson Mays and Bryce Pinkham from Tony winning “Gentlemen’s Guide to Love and Murder” came with wives and had terrible seats and no seats at the after party. (They didn’t complain.)

Moss Hart and George S. Kaufman had their heyday in the 30s and 40s but their comedies are timeless. You look at these charming people on David Rockwell’s gorgeously cluttered set and think that if they added a TV or a laptop the whole thing could be taking place right now. Get over to the Longacre and see what I mean. LOL, Kaufman and Hart would say now.