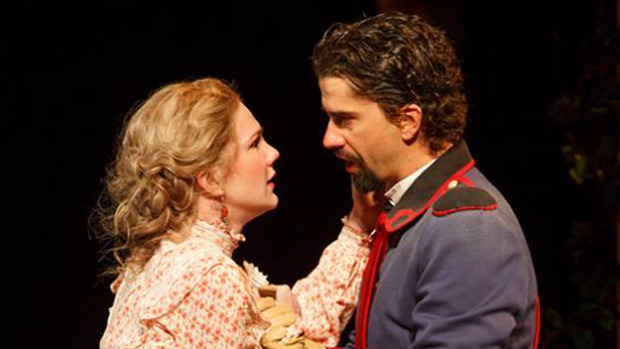 Alas, it was not meant to be, me seeing “Much Ado About Nothing” at Shakespeare in the Park. Torrential rains and what looked like a typhoon cancelled the show for a second night in a row at the Delacorte Theater.

Hundreds of theatergoers huddles under the eaves of the Delacorte starting around 7pm for an 8pm curtain. But the skies darkened, thunder roared, lightning snapped and lit up Central Park.

When the rain really started to pour the crowds pulled in tightly. I realized I was standing next to Megan Mullaly, of “Will & Grace” and Broadway fame. She was with a friend, Jodie Markell, the actress who adapted and directed a fine 2008 film of Tennessee Williams’ “The Loss of a Teardrop Earring.” We all gossiped for a while, unable to brave the wall of rain. Megan will co-star this fall with Matthew Broderick and Nathan Lane in Terrence McNally’s  “It’s Only A Play” with Stockard Channing and F. Murray Abraham. What a cast!

Then, by accident, “Much Ado” star Hamish Linklater appeared out of nowhere and began apologizing that the show had indeed been cancelled. The heavy rain intensified. Linklater stopped and talked to us, mostly because of Mullaly and Markell. I told him I’ve seen him in Woody Allen’s “Magic in the Moonlight.” “It’s silly, right?” he asked. “I’m very silly.” He is, the movie is very funny.

Lily Rabe showed up next. She and Linklater have been the stars of Shakespeare in the Park for the last several years. Now they are a couple. It’s very nice. They are probably the best two “young” actors in New York. I asked them, “Since I have to write about something, could you do some of the play for us right here?” They declined. I asked Lily, facetiously, “Are you at least good in the play?” She answered: “We are, I wish you could have seen it. Everyone is good. He’s good,” she pointed to Linklater. “I don’t know about me, but  I know that.”

A homeless man came in under the eaves out of the rain. He was pulling a red suitcase on wheels, and a had a large umbrella. He was missing several teeth, but he was wearing a North Face camouflage jacket. “I came prepared,” he said to no one. Then he asked Linklater, “Are in the play?” The actor intoned, “Yes, I am Benedick!” They discussed Benedick’s standing as a soldier vs. the man with the red suitcase’s own military interests. Then Linklater said to Rabe, “We have to go.”

“Much Ado” closes Sunday after one more performance on Saturday, depending on weather. “King Lear” with John Lithgow and Annette Bening starts on July 22nd.