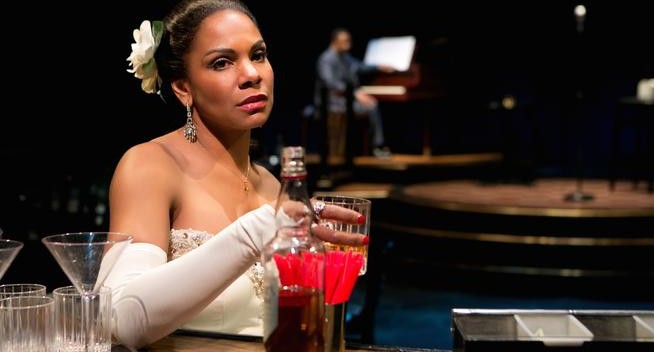 What a night for the Tony Awards! Audra McDonald won her sixth statue, this time for Best Actress in a Play even though it was a Musical but it’s okay because everyone loves her.

“I’m a little out of it,” Audra said at the Plaza Hotel, where the big fancy Tony after party was hotter than ever this year. “If my daughter asked for keys to the car I’d say yes,” Audra said, laughing. Is she old enough to drive? “No, she’s only 13. But that’s the way I feel right now.” Husband Will Swenson, nominated for playing a very dark and intense Javert in “Les Miz” this season, took it all in stride.

And Audra? No more “Private Practice” type shows. “Hey I loved those people,” she said.

Meanwhile, the Tonys went pretty much as everyone thought, with “Gentleman’s Guide” winning Best Musical, “All the Way” getting Best Play, “Hedwig” receiving Revived Musical and “Raisin the Sun” earning best Revived Musical. All the actors except for McDonald were new to the winner’s circle if not Broadway itself: Jessie Mueller, Neil Patrick Harris, Bryan Cranston, Sophie Okonedo, James Monroe Iglehart, Lena Hall.

Not only were the winners talented but the runners up were all top notch too, like LaTanya Richardson, Tony Shalhoub, the guys from “Gentlemen’s”– Jefferson Mays and Bryce Pinkham, Nick Cordero, and so on.

Jessie Mueller won Best Actress in  Musical playing Carole King in “Beautiful.” Remember the whole story about Carole not coming to opening night, and saying she didn’t want to be involved? Uh, last night Carole got on stage and played the piano and sang with Jessie at Radio City. Now that the show’s a hit, she’s come around. Also on hand were the rarely mentioned ‘others’ from that show– Barry Mann and Cynthia Weil. They wrote “You’ve Lost That Lovin’ Feeling.”

I ran into the Manns on the red carpet, along with Patty Clarkson, Candy Spelling, Sting and Trudie Styler, and Rosie O’Donnell. Sting wowed the audience later with the title song from his musical “The Last Ship,” which starts previews in Chicago on Tuesday. Watch for it next year at the Tonys.

More from the Tonys in the AM…