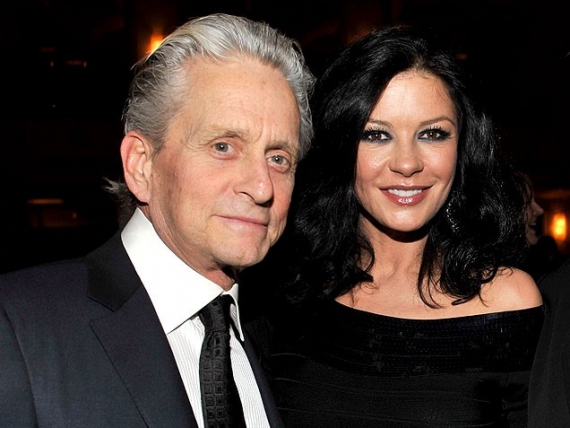 Director-actor Rob Reiner wasn’t quite sure why the Film Society of Lincoln Center gave him the Chaplin Award at their annual gala last night. He told a high school reporter on the red carpet: Maybe it’s a typo,” a punch line he riffed on later, on stage when accepting the award.

Missing from the event were people who might have livened it up, like Christopher Guest and Harry Shearer. Whoever put the show together didn’t seem to get that “This is Spinal Tap” launched the world of mock-u-mentaries.

But making a rare public appearance, and looking happy but low key, were Michael Douglas and Catherine Zeta Jones. Catherine looked lovely, and was very approachable. This is the celebrity couple everyone roots for.

Reiner has a spectacular list of films from 1982 to 1994– “This Spinal Tap,” “When Harry Met Sally,” “Stand by Me,” “The Princess Bride,” “A Few Good Men,” “Misery,” and “The American President” are movies all directors would give their eye teeth for on an imdb list.

But after the 1996 “Ghosts of Mississippi” went way off track, Reiner did, too. “North” had already shown the situation was tenuous. Then  “The Story of Us,” “Alex and Emma,” the grossly sentimental  “Bucket List”, something called “Flipped” and a Morgan Freeman movie no one knows, “Rumor Has It” and a documentary about Prop 8 constitute the last two decades.

A clip was shown from his upcoming “And So It Goes” with Michael Douglas and Diane Keaton that looks like a remake of “Something’s Gotta Give.” (Also, it’s the first time I can recall a Castle Rock film not distributed by Warner Bros. Something called Clarius Entertainment has it.)

Last night’s show was heavily scripted, but some of the speakers brought a little life to the room. Michael Douglas is always in good form. It was fun to see Billy Crystal and Meg Ryan together again after 25 years. “You wanted a sequel to “When Harry Met Sally”? he said. “This is it.” Cute.

Scorsese noted that Reiner was playing a send up of him as the documentary director in “Spinal Tap.” Apparently, the parody was of “The Last Waltz.” Even though I was around for all those movies, I’d forgotten that. It made for a funny bit.

Reiner riffed a little bit, and was sardonically amusing. But he had no real prepared speech. It’s interesting: his movies, with the exception of “Spinal Tap,” are not at all in the same realm of humor as his dad or Mel Brooks, his obvious idols. I wish he’d said something about what draws him to material, or what mattered most in the making of the seven or eight really really good films.

Reiner did joke about Scorsese casting him as Leonardo DiCaprio’s father in “Wolf of Wall Street.” He said, “I wondered which was more preposterous: Leonard DiCaprio being Jewish, or me looking like him. I thought, I must be better looking than I am!”

A dinner followed in the upstairs lobby of Avery Fisher Hall.