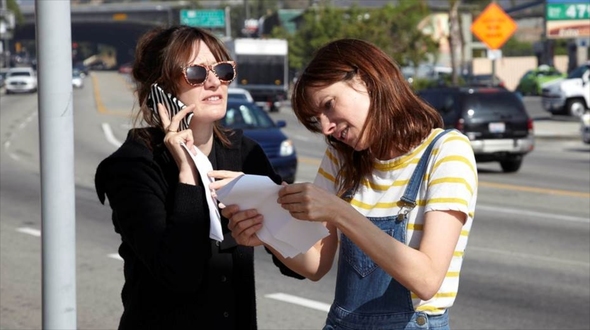 HBO keeps looking for a half hour hit with grand gestures. Will “Sex and the City” or “Entourage” ever be replicated? “Veep” is the nearest thing they have to that kind of perfection.

On Wednesday, the cable network will debut a show they didn’t make, brought in from Sky TV in London but set mostly in Hollywood. The six episode series is called “Doll & Em,” produced by actor Alessandro Nivola, co-written by and co-starring his actress wife Emily Mortimer with her childhood best friend Dolly Wells. It falls like a blessing from the sky.

The premise is that the fictional Emily and Dolly are also best friends. Like real life Mortimer, Em is a British successful actress living in New York. Just as she goes to Hollywood to make a movie, Em’s best friend Dolly breaks up with her boyfriend in London. So Em invites Doll to come with her and be her assistant.

“Doll & Em” is a comedy, but it’s also quite dark and gets quite dramatic in places. There are plenty of knowing laughs, too, about the inside workings of Hollywood and of the actors’ life. But it’s more grounded than just that as Dolly starts to become Emily. It’s “All About Eve” with a major twist. It’s also very subtly and skillfully textured. The women are best friends. But there are complicated layers to the friendship. Those layers are peeled back very cleverly by Mortimer and Wells. We watched the six episodes back to back last night at a screening. But it will be worth the wait to go week by week, believe me.

We know Emily Mortimer from Woody Allen’s “Match Point” and Aaron Sorkin’s “The Newsroom” among other projects. Wells is known in London but this will bring her to a new audience. They are smart, funny, attractive. You start out thinking this is an update on “Absolutely Fabulous” but then you realize– everyone is sober, and serious.”Doll & Em”  is all about nuance.

Frankly, the people involved could have made “Doll &Em” as a two hour indie film, gone to Sundance, etc and it would have been a big hit. It’s that good. But it is episodic. Scruffy New York native Azazel Jacobs, who wrote the scripts with Mortimer and Wells, told me: “I felt freed from having to make transitions that would have been forced.” He definitely sees the potential for a second six episode series. Viewers will want it, too.

Not at the screening, but look for hilarious cameos in “Doll & Em” from Susan Sarandon, John Cusack and Andy Garcia.

PS Emily told me the third and final season of “The Newsroom” begins in a few days. And no, she has not seen a script, and has no idea what this season’s story will be.