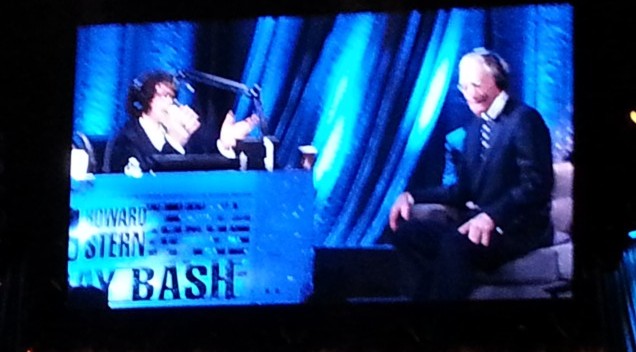 So many headlines from the Howard Stern Sirius Radio 60th birthday gala. First was the appearance of New Jersey Governor Chris Christie. He received muted applause when he entered, and almost nothing when he left the stage at the Hammerstein Ballroom. One insider told me as Christie first came on: “We were afraid he’d be booed.” This was more like indifference. All the rowdy applause and cheering of past public appearances was absent. The mood was vastly different. Christie must have known that.

But that was the only awkward moment in a four hour party that really was a smash hit of an evening. Stern broadcast on his Sirius channel from 6 pm to 10:30pm, doing his radio show with Robin Quivers from the Hammerstein stage. Jimmy Kimmel was sort of an extra master of ceremonies. And the guests were just one after another either very funny or musical stars.

By far the most interesting moment was a 30 minute– yes, half hour– sit down interview live on stage with David Letterman. I’m hopeful Sirius will release the clip. Howard was so impressive, and he got a masterful session done with the usually taciturn Letterman. And the subject seemed more than willing. Not only that, but Kimmel served as sort of a second banana, and Letterman interacted with him nicely.

Dave and Howard covered many topics including Letterman hanging out with Johnny Carson early in his career. They got to politics. Howard asked him if he’d ever voted for a Republican. Letterman replied: “Not that I know of.”

Dave also revealed to Howard that he did not attend Larry “Bud” Mehlman’s funeral. He did say he spoke to Jay Leno once in the last few years– when Jay announced his second departure from the Tonight Show. Dave indicated that he still holds a grudge against Jay from the old days.

This interview alone may be Howard’s finest hour. You could tell he really was invested in being serious, if not Sirius. Letterman rose to the occasion.

Other guests included the musical performer ones– House band Train, plus Rob Zombie, Adam Levine — playing without Maroon 5, John Mayer, Dave Grohl, John Fogerty, Steven Tyler sans Aerosmith but with Slash. Plus there were some terrific parody songs– by Rosie O’Donnell, and by Sarah Silverman with Natalie Maines of the Dixie Chicks. Adam played “Purple Rain” with Train; it was the first time I’ve seen him solo without his group. Jon Bon Jovi got a huge ovation for a spectacular “Wanted Dead or Alive.”

Jimmy Fallon did some dead on impersonations for Howard. Bryan Cranston stopped by, as did Lena Dunham from “Girls.” Cyndi Lauper and husband David Thornton were in the audience, as was Barbara Walters (no idea why), Sandra Bernhard, the great comedy writer Alan Zweibel, Patti Smythe and John McEnroe, plus Katie Couric and Louis CK, Fred Armisen, David Spade, Johnny Knoxville, Zach Braff, and Robert Downey Jr. with wife Susan (and a lot of unpleasant security) among others.

The funniest stuff came from Joan Rivers and Jeffrey Ross, who turned their segment into a Friars Roast. I can’t reprint any of it.

No one seems to know if Sirius will market a DVD of the evening but they should. Kudos to Scott Greenstein for pulling it off.