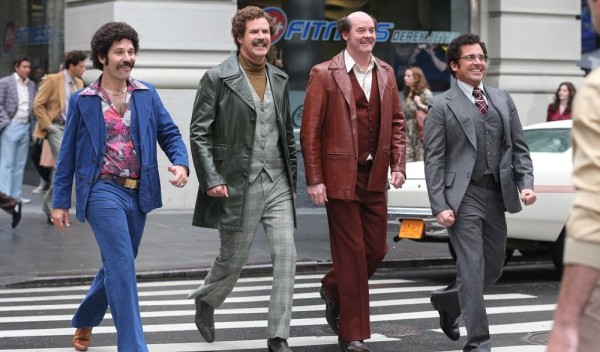 At last we saw “Anchorman 2: The Legend Continues,” the best marketed movie of 2013. No kidding. “A2” and Will Ferrell have a sizeable tie-in to Dodge, the result being a ton of trucks sold this fall thanks to the relentless pitches on TV. There’s also a Ben & Jerry’s ice cream and a Scotch (from a real Scottish distiller) tied to the movie.

You’d think from all the huckstering that “A2” would be sort of not too good. And yet, it’s absolutely hilarious. It’s stupid, goofy fun, and much needed as the year draws to a close and the ‘Oscar movies’ crowd theaters and columns. “Anchorman 2” is a much needed relief.

Last night’s premiere from Paramount Pictures was one of the most innovative of the season. Instead of going to the Ziegfeld, Paramount chose the Beacon Theater on the Upper West Side. No less than journalist Bill Kurtis of Chicago and CBS, with his booming voice, not only introduced the movie but also narrated it. Clever. Will Ferrell and most of the cast sat through the screening, which included friends, family, some press, and contest winners. Ferrell and director Andy McKay must have known they had a hit. They were confident enough to stick it out.

Then on to the Cipriani 42nd St party, where a dee jay spun records suspended from the ceiling on a platform. That was a first. “What if he has to go to the bathroom?” asked one observer. We never got the answer. The room was beautifully redecorated for the occasion into conversation pits instead of tables. Actor Edward Norton got into such a serious chat with Kristen Wiig we were afraid she’d never come out of it. So we slyly interrupted.

Around the room, each and every cast member was holding forth. Will Ferrell somehow let himself be overtaken by lines of strangers waiting to say hi and take pictures. He complied with every one of them. Steve Carell told me he was glad Bennett Miller’s “Foxcatcher” had been postponed. “Can you imagine doing the publicity for both of the movies at the same time?” he asled. In “Foxcatcher” he plays a murderous wrestling coach. In “Anchorman” he’s the goofy weatherman who gets lots of laughs. These two things do not go together.

“Anchorman 2” gets its laughs from the characters, who are even better drawn here than in the first movie. And while it spins out of control into lunacy with dozens of “surprise” cameos (Kanye West, Sacha Baron Cohen, Tina Fey are among those all in one scene), the movie has a quasi serious side as it questions what is news anymore.

The movie sends up Fox News and Roger Ailes’s earlier America’s Talking channel via CNBC. For anyone who’s worked at Fox or watched it, the message is clear as Ferrell’s Ron Burgundy becomes a flag waving patriotic sensationalist with tons of graphics on screen and empty stories about heroes, pets, and other inane subjects. I’m not sure if News Corp understood this as there is a big paid plug for the New York Post, Fox News’s cousin, in the middle of the movie.

All that aside, “Anchorman 2” should be a big hit. It’s rude, a little raunchy, loud, and non-stop funny. I left wanting to see it again. That’s a good sign.