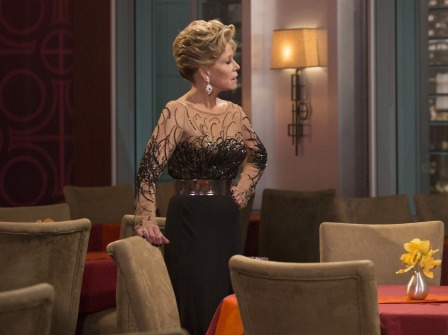 Last night’s HBO drama “The Newsroom” got a jolt of electricity–at last. It came from two time Oscar winner Jane Fonda, who gave an Oscar worthy performance and stole the entire season in one fell swoop. Fonda plays ACN owner Leona Lansing, and is used sparingly by show creator Aaron Sorkin. She’s nominated for an Emmy from last season (and deserves to win, hands down).

Last night Fonda appeared in the final, surprising scene of a very busy episode that revealed the entire Genoa story– how ACN was duped by producer Jerry Dantana and a congressman (excellent work by Frank Wood) who blamed his son’s death on being fired from his internship. When Charlie (Sam Waterston) and Will (Jeff Daniels) go to Leona to resign, Fonda surprises them. First of all, she looks like a million bucks. Second, she’s a little buzzed from a dinner for the Tribeca Film Festival. She refuses their resignations, and makes a speech that is absolutely phenomenal. The entire episode ends with Fonda in a cold cut that’s like a cold wet wash cloth in the face. It’s just wonderful. HBO has no clip from the show, so you’ll have to watch the whole thing or skip to the end.

If you want to see lightning strike through a scene, then this is it. Why Fonda doesn’t get a “special guest star” credit up front when she’s on perplexes me. “The Newsroom” needs her. The show can be very whiny otherwise….