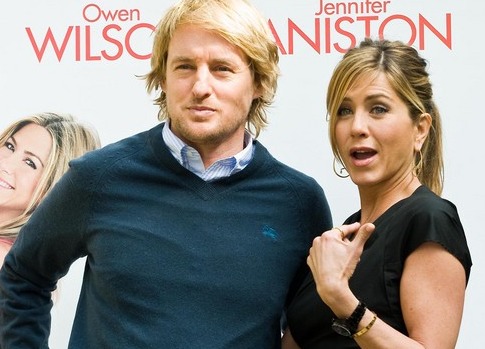 Exclusive: I am just recovering from a set visit on Wednesday to Peter Bogdanovich’s “Squirrels to the Nuts.” This is a comedy being filmed by Peter in New York, a lot in my neighborhood, and some on my street. On Wednesday I visited producers Holly Wiersma and Logan Levy waaaaay uptown in Washington Heights at the magnificent United Palace Theater. Built in 1930, the Palace was once a vaudeville and movie theater. Its ornate and complex interior is sort of Turkish-Moroccan with dashes of Greek, Egyptian and Pluto.

But the seats are red velvet, and there’s a regular stage, so Owen Wilson’s fictional theatre director was premiering his “Broadway play” called “A Grecian Evening.” There’s even a fake Playbill. In the film, Aniston, Will Forte, and Cybill Shepherd and Richard Lewis are all supposed to be in the audience, applauding wildly. Somehow, my own mom, a theater critic, as well as Will Forte’s mom, plus yours truly and my brother all wound up as unpaid extras. It was a little surreal and a lot of fun.

Bogdanovich has not made a feature film since 2001’s “The Cat’s Meow.” He’s dabbled in TV, acted and taught film. He’s published a few books. But think of this resume: “The Last Picture Show,” “Paper Moon,” “Daisy Miller,” “What’s Up Doc?” “At Long Last Love,” and “Mask” are his standouts. Plus he was involved with Cybill Shepherd and with infamously murdered Playboy Playmate Dorothy Stratten. He was also married Stratten’s sister, Louise, for 13 years. They  remain close friends. Stratten co-wrote the “Squirrels” script and was also on set Wednesday.

Now here’s Peter, 74, with his daughter and grandson in tow, Shepherd in the film, Stratten at his side, and it’s all good. It’s like a happy ending. And he’s telling my mom and Mrs. Forte where to sit.  We talk about the late Eileen Brennan, who has just passed away. “I had her in four films,” Peter says, shaking his head. “I gave her her first movie role in Picture Show. She was wonderful.”

And we’re all waiting for Jennifer Aniston.

She arrives: she is not pregnant, as someone suggested tonight on line. She looks amazing in a silky, slinky black dress and Shirley Temple curls. I’ve met her a couple of times before, but never at work. She’s a total pro. It’s her last day on the shoot and everyone is congratulating her. But Aniston is charming to all the extras, chats with everyone, and gets the remaining job done. She has excellent comic timing, which Bogdanovich appreciates. She chats with the moms, and then says goodbye.

Later Owen Wilson comes in, He’s also friendly, if a little bit more shy. Cybill Shepherd is great. In the scene she wears a leopard print moo-moo. She says afterwards that Memphis is still her favorite town. She and Richard Lewis have good cranky chemistry as an old married couple. When I tell her Bruce Willis was just in town, she says, “I’m sorry I missed him.” I think she means it.

“Squirrels” won’t wrap for another couple of weeks. There’s still lots to film with Kathryn Hahn, Imogen Poots and Rhys Ifans, who figure prominently in the story. The movie has lots of little cameos, too. Vanity Fair editor Graydon Carter plays a chauffeur. Stephen Dorff appears as himself. Someone says the producers wanted Jack Huston, but “Boardwalk Empire” wouldn’t let him out for a day. When it’s finished, “Squirrels” will look for a distributor, maybe at Sundance, or Tribeca, or even Cannes.