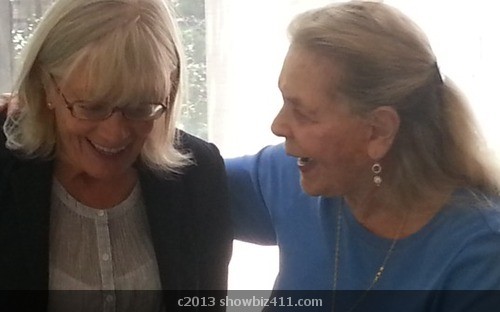 I just came home from lunch with two irascible  legends, Lauren Bacall and Vanessa Redgrave. And now I need a nap. (A picture I took is attached.) Terence Stamp was also there. He and Redgrave star in a charming film to be released this Friday by The Weinstein Company called “Unfinished Song.” Peggy Siegal organized the lunch at Michael’s, with a few other notables including Cuba Gooding Jr, Carolina and Reinaldo Herrera, newspeople Bob Jameson and Jody Applegate, and so on. I never got a chance to talk to Frank DiGiacomo, who’s turned Movieline around.

But I got to sit with my old friend Bacall.  She and Redgrave couldn’t stop hugging and kissing each other. They became friends many years ago through Vanessa’s late great daughter Natasha Richardson. Betty Bacall said, “I don’t go out and I don’t go to lunch. I did this for Vanessa Redgrave.” They caught up on family stories from both sides, especially updates about grandchildren.

During lunch, Terence Stamp, the original General Zod from the Richard Donner “Superman” movies, made a toast. He looked around and said, “I was hoping to meet Harvey Weinstein,” he said, looking around the room. He added, “My feeling is, there’s an artist in there trying to escape.”

Redgrave — a mere 76 to Bacall’s 88– appears tonight at the Delacorte Theater in Central Park in a panel on Shakespeare. “We’re reading  about Shakespeare and money,” she said. In August, she appears in “The Butler” just in the opening sequence with Mariah Carey– a harrowing introduction to the movie by her account. Then she opens in September with James Earl Jones in London in “Much Ado About Nothing” at the Old Vic.  When that’s over she may return to Broadway with Jesse Eisenberg in their off Broadway hit, “The Revisionist.” She’s also in Bennett Miller’s “Foxcatcher” this Oscar season.

“What are you doing next?” I asked. “I know, but I don’t want to tell you,” Redgrave said. “Is that all right?” It is. She was more interested in spending time with her friend. She did get a little political, talking about global markets.

Bacall, laying low because of a pained leg, told me she did see Tom Hanks on Broadway in “Lucky Guy.” “He was pretty good,” she said, which is like getting an A plus. “He should have won the Tony.”

Journalist David Margolick came over and asked if he could interview Bacall sometime about her friendship with legendary composer Ira Gershwin’s wife. “It’s for a book,” he said.

“Everyone has a book or a film they want to ask me about,” Bacall said. She was non-committal. She made her exit at that point. It was great to see her. She’s a living Hollywood icon in our midst. Let’s not forget that. And damn funny.

Redgrave made a little speech, thanking everyone for coming. “I got to meet Cuba Gooding!” she said, deliciously.

PS Michael’s for a Monday was pretty filled up with a hot selection of peeps. In the main corner: Tom Brokaw and Dick Ebersol. That sort of thing.