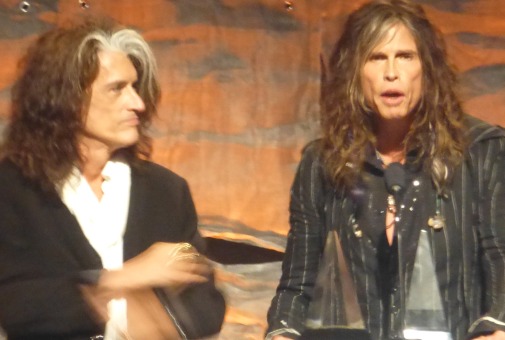 What a night at the annual Songwriters Hall of Fame dinner in New York! It’s the hottest music night in New York every year, and this year it was packed– almost 100 tables full– in the Marriott Marquis ballroom. The big moment was Elton John and Billy Joel each making up with the other, publicly. Billy was there to salute his friend, the late producer Phil Ramone.

Elton said during his beautiful acceptance speech: “I didn’t see you tonight Mr. Joel but I love you dearly and I hope I see you soon.”

Later Billy attributed their issues to “pianist envy.” He tried to cut across the amazingly crowded room to see Elton, but a fan got in the way and threw a tackle at the 20 yard line. Billy was too polite to ditch her as the fan reminisced about a minor incident from 30 years ago.

Elton and Bernie Taupin received the Johnny Mercer Award for Lifetime Achievement. No less a rock star than Sting opened the show singing “Saturday Night’s Alright For Fighting.” Sting presented the award to Elton and Bernie calling them “my heroes.” Sting also wound up staying for most of the show, he was enjoying it so much, even though he’s back on tour today.

Just a moment so you can absorb that all of those people were there, as well as Clive Davis, Natalie Cole, Valerie Simpson, Paul Williams, SHOF president Jimmy Webb, CEO Linda Moran who stages this enormous venture– plus Steven Tyler and Joe Perry of Aerosmith, Mick Jones and Lou Gramm of Foreigner, plus J.D. Souther (who was serenaded by Alison Krause), Patty Smyth who sang her 80s hit “Warrior” for songwriter Holly Knight (and John McEnroe was there to cheer her on), and the great Petula Clark — who’s 80 years old!!!– brought down the house with “Downtown” for songwriter Tony Hatch.

Not only that: Berry Gordy was introduced by Smokey Robinson with a long saga of how they first met, then the cast of “Motown The Musical” took over the stage.

The guys from Nickelback played “Sweet Emotion” for Aerosmith’s Steven Tyler and Joe Perry, who themselves rocked the house with “Walk this Way.”

The Foreigner guys also rocked out on “Juke Box Hero.” Then they added a gospel choir and pretty much stole the show with “I Want to Know What Love Is.”

Jordin Sparks turned in a flawless rendition of Sam Cooke’s “A Change is Gonna Come,” selected as the Towering Song

Some funny moments: producer-manager Peter Asher recalling how the details of the divorce from his first wife became the story behind Souther’s “Her Town Too.” “Everyone thought it was James Taylor singing about Carly Simon, but it was my story,” he said.