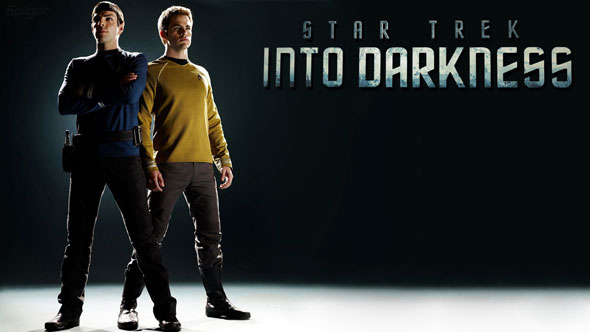 This is not your grandfather’s “Star Trek.” The new J.J. Abrams movie, “Into the Darkness,” opens next Wednesday. All I can say is: hold on. It’s great. Stunning, really. Abrams has made a far better movie than he did the original reboot. Shot in 3D. “Darkness” is a non stop wild ride, and still recalls the old “Star Trek” TV series faithfully as well the original movies. Leonard Nimoy makes a cameo appearance as the original Mr. Spock. But the new Spock, Zachary Quinto, is a revelation. Quinto becomes a full fledged action star with this episode.

At last night’s party following the New York mini premiere, I asked Zachary if he’d had to work out a lot. “I did,” he said, “and it was worth it.” The only problem is, he never gets to eat anything fun.

Quinto, Chris Pine (Kirk), and Benedict Cumberbatch all came in for the New York premiere. We are not allowed to reveal Cumberbatch’s character’s real identity yet– maybe after the first weekend. Suffice to say, the British theater actor and star of “Sherlock Holmes” said a parody of a song was sung a lot on set about his character. What were the lyrics? “I’d tell you but I’d have to kill you,” he joked.

Pine is turning into the next big studio picture hero. His next film is “Jack Ryan,” a new installment in the “Hunt for Red October” series.

Quinto comes to Broadway in late summer in “The Glass Menagerie,” with Tony winner Cherry Jones. Jones was there last night. “I’m not a Trekkie,” she said. “I’m a Star Trek baby.”

Singer Peter Cincotti came to last night’s premiere. He was blown away. But guess what? “I’ve never seen any Star Trek,” he said–the TV show or any of the movies. He loved it. We sent him back to watch everything.

SPOILER ALERT: Sharp eyed fans will notice a non human but much beloved character at one point. It’s one of the many nods to the original show. Abrams gives “Star Trek” a very Spielbergian feel– there are several nods to “Raiders of the Lost Ark.” But he’s also invigorated the movie in the same way he revived “Mission Impossible.” He’s achieved a delicate balance of blending the old with something new.

The question is, where will they from here? These “Star Trek” movies are prequels to the TV series. In this chapter, Klingons are introduced, and so is the five year mission to explore new worlds. Abrams and co. have left the door open for all kinds of adventures– and many more characters from the show’s history.

If you’re a “Star Trek” fan, you are going to love this movie.

PS Another starship is called the USS Bradbury. I’m assuming it’s a tip of the hat to legendary writer Ray Bradbury. I thought it could have been called the Roddenberry.