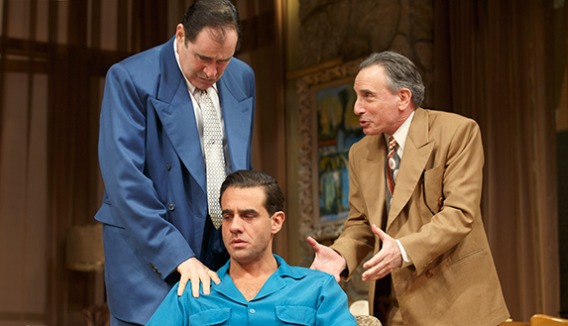 Hollywood buffs and old time gossips should take notice: Clifford Odets’ “The Big Knife,” which opened on Broadway last night after 65 years of dormancy, is a veiled look at a salacious moment in the life of Clark Gable. The play was produced once, in 1948, and never revived. Now Bobby Cannavale is a movie star with a load of secrets, and Richard Kind is the studio head who has enough nasty information to ruin him. In real life, Cannavale is playing a closely imagined version of Clark Gable, and Kind is Louis B. Mayer. Maybe.

What we do know: in 1945, Gable had a car accident in Brentwood, just past Beverly Hills. He crashed his car into a tree. That was the official story. But Hollywood press agents were (and still are) notorious for covering up scandals. And in this case, many people believed– and so did the tabloids of the time–that Gable had been involved in a hit and run that killed a girl.

Odets obviously knew the story, and the rumors. In “The Big Knife,” produced three years later, Mayer — Kind’s character– has helped cover up the crime. He’s sent a studio flack to jail who takes the rap for the girl’s death. Now he’s using this information to blackmail Gable–here, Cannavale as Charlie Castle– to sign a 14 year contract with the studio. Castle’s wife doesn’t want it. And then a witness to the accident turns up. And things turn ugly.

Did Gable do it? Who knows? But his life was full of secrets– including his illegitimate daughter with fellow star Loretta Young. Odets, a playwright, worked in Hollywood in the 40s as a successful screenwriter. But he was bitter. And then in the early 50s his life was destroyed by the Hollywood blacklist and HUAC. He died in 1963 at the age of 57.

“The Big Knife” slices through Hollywood’s studio system, and it’s rough. Cannavale is superb as Castle, a golden boy who’s made a lot of bad choices. Richard Kind unexpectedly–because he’s known for comedy– steals his scenes as he menaces these people to keep the studio moving forward. Kind will get a Tony nomination and maybe even win. He should. The whole cast is excellent.

A swell premiere party followed the opening last night at the Red Eye Grill, one that Odets would have loved (or actually hated). I ran into a lot of New York actors including Tovah Feldshuh, Tony Lo Bianco and Richard Schiff. David Schwimmer and Trudie Styler added some Hollywood type glamor to the evening. And there was a lot of blood-red steak, and a lot of big knives. Only Walter Winchell was missing, to finish us all off.