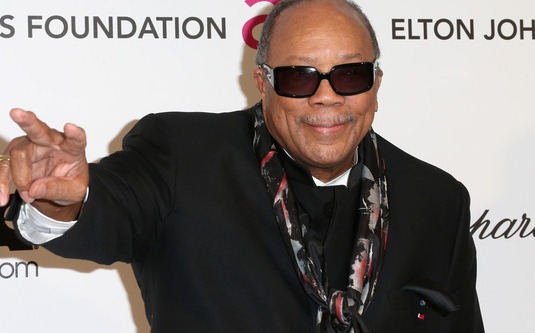 UPDATE: Here’s a report on the concert:  Bono opened. Jennifer Hudson did Aretha’s “Somewhere.” Jordin Sparks and Siedah Garrett did “Man in the Mirror” with a rap by Snoop Dogg. Herbie Hancock and Santana did “Killer Joe.”  Bebe Winans sang “In The Heat of the Night.”  Stevie did “Let the Good Times Roll” with Nikki Yanofsky and Happy Birthday solo. And James Ingram and Patti Austin did “How Do You Keep the Music Playing?” Chaka Khan did “What’s It All About Alfie.” Then everyone joined in on “We Are The World” at the end.

Earlier: Quincy Jones and Michael Caine were born on the same day in the same year almost at the exact same moment– 80 years ago on March 14th. On Saturday night, a month later, they were thrown a huge double birthday party in Las Vegas. Yes, it was for charity. The guests included Quincy’s TV star daughter Rashida Jones as well as Bono, Whoopi Goldberg, Will Smith, Amy Poehler, Larry King, Siedah Garrett, Carlos Santana and his wife Deborah, Chris Tucker, Jordin Sparks, Snoop Dogg, Cindy Crawford, and boatloads of famous names. The charity is called “Keep Memory Alive” and the evening raised money for the internationally famous Cleveland Clinic. I can’t believe Alfie himself is 80 years old. More importantly, Q’s turning that age may pose a problem. He once told me that his rule about dating young women: “Our two ages can’t add up to more than 100.” He may be entering into uncharted legal territory! Happy Birthday to great guys!