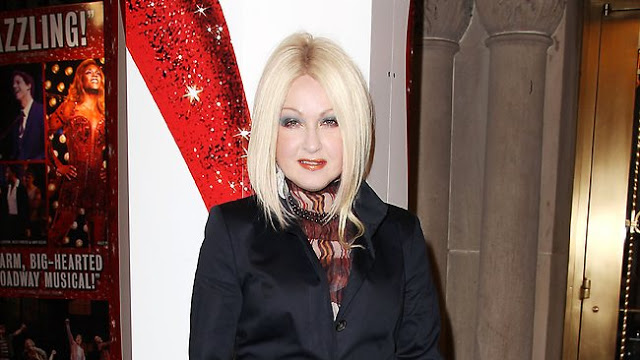 Cyndi Lauper is the hardest working rock star I know. She started out when Madonna debuted. Everyone thought Cyndi would be the bigger star. She writes her own hits and is a serious composer.She’s always had an uphill battle while less substantial people have vaulted over her. But slow and steady proves to be the right course after all. Her “Kinky Boots” musical with Harvey Fierstein opened on Broadway last night and even the New York Times loved it. It’s a wonderful, buoyant jubilant musical with a Tony award winning score. Cyndi wins. Hands down.

This adaptation of a little known but fun British movie has everything going for it–great songs, strong story with a positive message, amazing sets by David Rockwell, and a hot cast. You will go crazy for Billy Porter, Stark Sands and the whole cast, especially Annaleigh Ashford, who’s going to great lengths for a Tony herself as featured actress. Stark Sands looks like an All American kid, but he is a rock star. He played one in “American Idiot,” and he acts like one here.

Sands plays the son who inherits the failing British shoe factory. He must make a go of it so he turns to a transvestite designer to revive their line with cool boots. Billy Porter is lucky he’s really a man, otherwise he’d be up for Best Actress in a musical. He’s glorious as Simon, who also makes a show stopping 11 o’clock song that would usually be handled by Jennifer Holliday or Jennifer Hudson. You’ve got see all of Jerry Mitchell’s dance numbers. As much as I loathed “Priscilla, Queen of the Desert,” this “Kinky Boots” does right by disco, trannies, and people of all ilks.

In the audience so many A listers: Glenn Close,Brooke Shields, David Geffen, Joan Rivers, Larry Kramer, Liza Minnelli, our old pal Johnny Podell. Cyndi, with multi color hair, was tense as could be before the show started, but she sat up front on the aisle with husband David Thornton and son Declyn. And when Billy Porter finished his big number, it was Lauper who stood right up and started applauding.

Later as people tried to congratulate her, Cyndi, in usual form, said, “Oh yeah. But my bunions are killing me.”

She has two months to get them in shape before the Tony Awards.