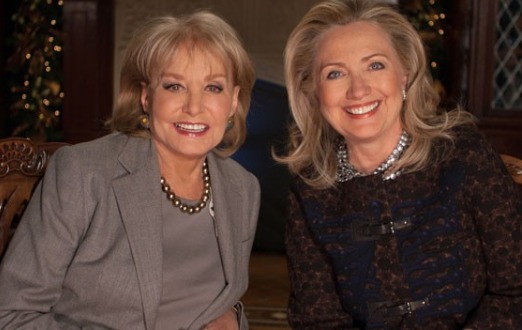 Barbara Walters did make a cagey announcement on yesterday morning’s edition of “The View.” She was pretty clear that if she were to make an announcement about retiring, it would on the show and not via a website. So now I can tell you exclusively about my conversation with Walters last night at the premiere of Tom Hanks’s play “Lucky Guy.” West Forty-fourth Street was so backed up with limos that Barbara, a feisty 83 year old on high heels, got out and walked up the block from Eighth Avenue. I happened to run into her and we talked about the events of the day.

She said, “How was I?”– meaning on the show that morning. I said: “You came out with guns blazing, and you looked great.”

Barbara: “Good, because I never went home to change. I’m wearing the same outfit under this coat.” Which was strawberry pink, and pretty chic looking. She’d been in the office all day, like everyone else.

And so. “I wrote over the weekend that you were ambushed, that you might only retire from ABC News but not The View.”

While we were walking, a passerby yelled out to her: “Don’t retire, Barbara!”

Barbara, replying to me and to the stranger: “I wasn’t retiring from anything. I’m not retiring.”

Well, this is in direct opposition to what I keep hearing out of ABC, where they’ve obviously decided otherwise. And let me tell you, they’re not going to get Barbara to roll over and play dead. She never has. And Walters strutted right into that theater, through a big crowd, got her tickets and walked the red carpet like a pro. She spent the intermission chatting with Joy Behar and her husband, Steve.

And PS she loved the play. She knows from drama.