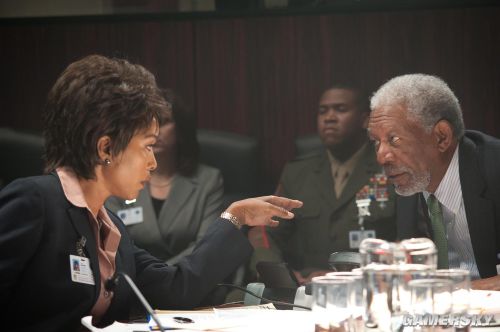 UPDATE: Life imitates art– in the current release “Olympus Has Fallen,” Angela Bassett plays the head of the Secret Service. Today in real life (that’s what we call it) a woman was named for the first time to run the Secret Service. Julia A. Pearson, a long time member of the Secret Service, got the job. Is that a movie tie in or what? http://www.nytimes.com/2013/03/27/us/politics/obama-appoints-woman-to-lead-secret-service.html?hp

At the junket for “Olympus Has Fallen”, our PAULA SCHWARTZ asked Angela Bassett  what it was like playing the head of the Secret Service.

“Oh I was very pleased, very honored because it’s historically, we’ve not been in that position, so it was a real honor to be able to portray that the first time in film, so I was very thankful to Antoine (Fuqua) and his vision of changing the way that we see that position. It’s been done in television before. Sometimes entertainment leads the way, that’s the place. It’s about creativity and opening it up and what the world can look like.”

Ironically, the first-time screenwriters, husband and wife Creighton Rothenberger and Katrin Benedikt originally wrote the role of head of the Secret Service for a man.
Changing that role for a woman and casting Angela Basset was director Antoine Fuqa’s idea: “I wanted great actors in the movie period,” he said at the “Olympus junket.”
He has two strong women roles in the film, Melissa Leo plays the Secretary of Defense. “I never thought about it in the sense that I wanted them to be women,” Fuqua said. “Then you look at a woman like Hillary Clinton and I thought, ‘Who has that power? Who can do that? And Melissa Leo (snapped his finger) just in your head. And then who’s going to be the head of Secret Service? And I think it was written for a man in the beginning. Yeah it was. And I thought, why does it have to be a guy? Get Angela. Like in my mind I didn’t sit back in my mind and think they never did have as the head of the Secret Service as a woman in the movie. I just wanted to work with Angela, so that’s how it came about.”

FROM MARCH 10th: Past Oscar nominee and movie star Angela Bassett just had lunch with First Lady Michelle Obama. In her new movie, “Olympus Has Fallen,” Bassett plays the tough head of the Secret Service. (Only in a movie could a woman have such a job.)** In real life, Bassett was a surrogate (meaning, an active supporter) last year for President Obama. Guests at the luncheon, she said, included other “surrogates” ( active supporters), including make up artist Bobbi Brown, Phylicia Rashad, Cynthia Nixon and Ashley Judd, Bassett told our PAULA SCHWARTZ.

“The First Lady sat between me and Ashley Judd, running potentially for Congress,” Bassett said. Judd plays the First Lady– and since our interview declared her intention to run for the US Senate, from Kentucky, as a Democrat. (Gerard Butler is the president and the star of the film.) Bassett told Mrs. Obama that she and Ashley Judd, are in  a movie together — “and it’s about the White House. We started talking about females in the secret service agency.”

The First Lady told Bassett and Judd about the Secret service women who protect her and the girls and how they joke around..

So did Bassett tell the First Lady the movie was about terrorists taking down the president and his family?

“Oh no, I didn’t tell her about that part,” she laughed.

The gorgeous Bassett, who is flawless even up close and looks several decades younger than her 53 years, was the only female star of the testosterone fueled “Olympus Has Fallen,” directed by Antoine Fuqua, and starring Gerard Butler, who was able to attend the film’s junket recently at the Waldorf Astoria. (Melissa Leo, who plays the Secretary of Defense, couldn’t make it at the last moment.) The action thriller is about a disgraced Secret Service agent (Butler) who tries to redeem himself and tries to rescue the President and his son when terrorists take down the White House. (The movie opens March 22.”

The sets, interiors and underground bunker of the White House were especially built for the film, with details so exact even the red doors of the presidential bunker are duplicated.

Participants at the junket included the director and Butler, who is also the producer, Aaron Eckhardt, Rick Yune, Dylan McDermott and first-time screenwriter married couple Katrin Benedikt and Creighton Rothenberger. The movie has a great cast that also includes Morgan Freeman as Speaker of the House, Robert Forster as a top general.

What drew the “What’s Love Got to Do With It” star to the script she told us was “initially first and foremost to work with Antoine and that he was going to turn this character, make it a woman.” In the original screenplay the Secret Service chief was a man.

She added:  “And this was one of those page turners which – I’m not very good at reading scripts, if it doesn’t get you by 30 pages it’s not going to do it – but this one kept me until the end.”

When asked how realistic the story was, whether she thought terrorists could storm the White House and kidnap the president, Bassett exclaimed, “I hope not. I hope not. Oh my Gosh!”

She said the tech crews reassured her the president and his family and the White House were in good hands.

“It went a long way to make me feel secure this would not happen,” she said.

At the end of the roundtable Bassett turned to the women journalists and asked, “Did you ladies enjoy the film? These guys. They play to the guys.”

When assured we liked the movie and seeing two strong women roles, especially where Bassett played such a “bad ass” a woman remarked, which prompted the actress to smile.

“I took my mother in law to this,” Bassett said, ” and she said, ‘Wow! The body count is sure high.”