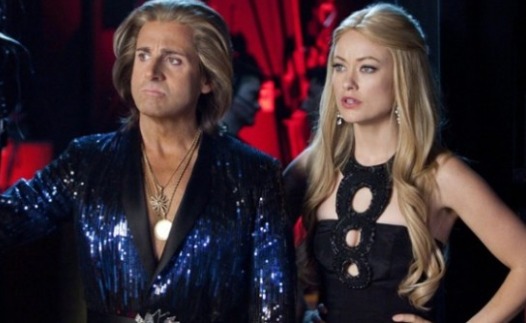 SUNDAY UPDATE: Worse news than was thought: “Burt Wonderstone” comes in at $10.3 million for the weekend.

Earlier: This has not been a great winter for Warner Bros. This morning they’re waking up to their fourth box office disaster in a row. “The Incredible Burt Wonderstone” — with real stars Steve Carell, Jim Carrey, James Gandolfini, and Oscar winner Alan Arkin. The movie looks like it will make a very meager $11-$12 million. The official budget is listed as $30 million, but of course, that’s highly unlikely given just that quartet. The cast also includes Olivia Wilde, Jay Mohr, and actual magician David Copperfield. “Wonderstone” also sports 11 producers, 4 writers, and 1 director–Don Scardino, a highly regarded television director and former actor.

“Burt Wonderstone” caps a long, bleak stretch that started with “Gangster Squad,” “Beautiful Creatures,” “Bullet to the Head,” and “Jack the Giant Slayer.” Every studio has its run of back luck. Warners is also coming off a mega success with “The Hobbit” and a Best Picture Oscar for the hit “Argo.” Last year “The Dark Knight Rises” was a monster success. And the studio is looking forward to a glittery opening for “The Great Gatsby” in May including the Cannes Film Festival premiere. Also about to be unleashed: “The Hangover Part III,” “Man of Steel,” a promising comedy called “We’re the Millers,” and “Gravity” with George Clooney and Sandra Bullock.

This film, though, is a puzzlement. Why it was allowed to butt up against “Oz the Great and Powerful,” another family film with magic that had “The Wizard of Oz” marketing edge? And the mixed to poor reviews didn’t help. Neither did the very tacky looking posters. Oh well. This, too, shall pass.