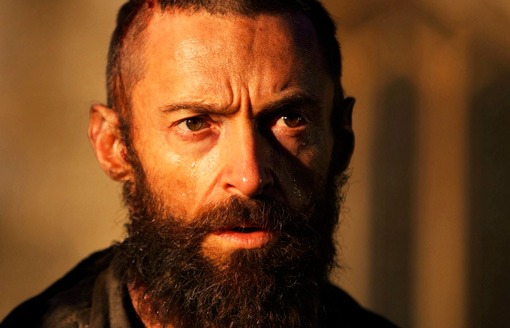 The cast of Tom Hooper’s “Les Miserables” doesn’t need much encouragement to sing for their supper. In New York this week they did it at lunch; the video is in our player at the bottom of the home page. But last night (Friday) they declined to do so at a Spago dinner celebrating the film after a screening. Our LEAH SYDNEY (who reviews the film below) reports that Hugh Jackman said he was “brokenhearted” about the terrible tragedy in Connecticut and that Anne Hathaway felt the same way.

Leah reports: “There was a definite pall over the night.  Everyone was somber.  They were going to sing, but didn’t out of respect. They were all gracious, and accepting kudos from many members of the Broadcast Film Critics Group, plus Mary Kay Place, Lainie Kazan, and many industry insiders.”

The mega talented Eddie Redmayne, who plays Marius, said that the “Les Miserables” producers had just gifted him a piano, which he is proficient at, and that he just bought a new flat in London.  Eddie said, “It takes up most of the space.”

Leah: “Since you won the Tony for “Red”  and you’re amazing singer and  piano player, is there anything you can’t do?”
Eddie: ” I can’t dance.  Honestly, I just had to twirl Amanda around and around. The choreographer gave up on me.  I can’t put two steps together.”

Sweetest moment: when he met Richard Sherman, of the famed Sherman Brothers, who wrote so many of the songs for the classic Disney Films like “Mary Poppins.”  Eddie was thrilled and bowed to him, and then started singing one of Sherman’s classics, “Chitty, Chitty Bang, Bang,” with some guests.  Richard beamed and joined in.

Hathaway was thrilled to see her good pal and our favorite actor, ‘Covert Affairs’ and Broadway stalwart Peter Gallagher.  Peter told us that he hopes to come back to Broadway in the fall with something new, but he was tight lipped about it and didn’t want to jinx it.

Full disclosure, as a devoted fan of the musical “Les Misérables,” I’ve seen the show numerous times in New York, London and LA.  I was thrilled with  Oscar winner Tom Hooper’s superb adaptation of the long-running stage musical, which is based on Victor Hugo’s epic, biblical tale of revolution and romance in 19th Century France.  Gleefully, enormously and unabashedly over the top in every way, “Les Miz,” will knock you over from the beginning and throughout the over two and half hour running time.

Epic in size and intimate in feel, Hooper expertly captures the drama of the misfortune and calamity of that tumultuous time. With most of the dialogue being sung, not spoken, you quickly realize that “Les Miz” is a unique experience, a happening really, of film, theater and art.  Hugh Jackman, with his Broadway pitch perfect voice, plays the reformed thief Jean Valjean. Jackman leads a truly gifted cast, standouts being Anne Hathaway’s break your heart piece de resistance Fantine, Eddie Redmayne and Amanda Seyfried as the sincere star crossed lovers Marius and Cosette, and Samantha Barks. When I saw her play Eponine in the Los Angeles Production, Barks garnered a rare standing ovation midway into the show. Samantha, once again, has earned kudos with her raw, gut-wrenching performance of a young woman in unrequited love.

Sasha Baron Cohen and Helena Bonham Carter provide welcome comic relief as Eponine’s parents, the nefarious con artist innkeepers.  Russell Crowe acts the part of Javert admirably as he pursues Valjean throughout the years, but his voice left me a bit wanting for a true Broadway belter. Still though, only minor quibbles in a film has so many lovely, powerful moments. Special notice also to Colm Wilkinson, the original Valjean, who beautifully plays the Bishop, and the impish Daniel Huttlestone as the child hero Gavroche.  Alain Boublil, Claude-Michel Schönberg and Herbert Kretzmer’s score is simply timeless.  Even the most jaded moviegoers will find themselves humming the songs way after the movie ends.  Tom Hooper bravely faced a stupendous undertaking and he most definitely wins.  Hooper has created a new crowd-pleasing classic for the ages.”