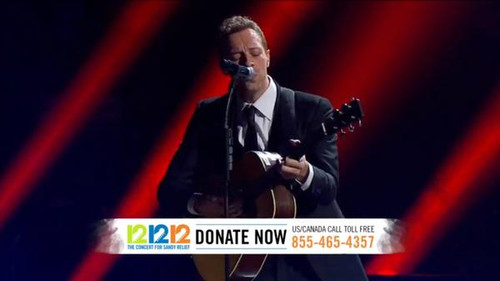 Chris Martin of Coldplay just dedicated his third song of the evening at the 12-12-12 Concert to “Anthony,” the garage worker who died in a flood during Hurricane Sandy. Martin and Gwyneth Paltrow live in the River Lofts on the West Side Highway, along with Meryl Streep and her family, and where Tommy Tune is said to have lost a treasure trove of artifacts in the building’s basement storage space. Other celebrities live there, too. But the state of the art building could not stand up to the ravages of the Hudson River overflowing. Many of the wealthy people who own crazy-view glassed in mansions in the sky over in West Soho or Tribeca had a lot of damage. But Anthony, who worked in the underground garage there, died during the storm. It was nice of Chris Martin to mention him. Martin’s performance of “Losing My Religion” with Michael Stipe was a highlight of the night.