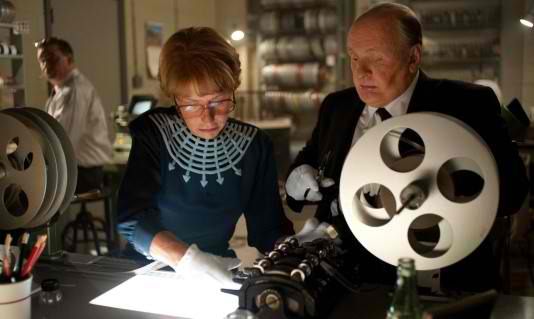 Alfred Hitchcock is back, in a big way. He’s the subject of two movies and they are diametrically opposed. He was either the obsessed whack job from “The Girl,” HBO’s excellent film starring Toby Jones as Hitch and Sienna Miller as Tippi Hedren. Or he was the lovable curmudgeon from “Hitchcock,” the Fox Searchlight feature film that’s going to get a lot of awards attention just about now. Of course, the irony will be that since the Golden Globes give awards to TV and films that both movies will be nominated as well as the actors and actresses.

“Hitchcock,” directed by Sacha Gervasi, is a lead pipe cinch for Oscar nominations considering the provenance of the leads. Sir Anthony Hopkins and Helen Mirren, each past Oscar Best Actor and Actress winners, are right in the zone as Hitch and his long suffering wife Alma. Mirren is absolutely sensational because she–like Imelda Staunton as Alma in “The Girl”– creates a completely fresh character for us because we don’t know anything about her going in.  The two Almas, of course, face different problems: in “The Girl” Hitchcock is obsessed with Hedren, and it nearly kills Alma. In the Gervasi film, Mirren gets to portray her as Hitch’s collaborator on “Psycho”– and actually makes Alma out to be the rogue in the couple’s relationship.

Whichever story is true, it doesn’t matter. But it’s instructive to watch Jones vs. Hopkins as the temperamental director. Jones doesn’t much go in for impersonation. He plays Hitch low key and without much affectation. Of course, the story in “The Girl” is more intimate, and circles around Hedren. Hopkins goes for the outsize bigger than life director, a blown up cartoon or parade float who’s comfortable with his celebrity and power. Jones makes Hitch’s fame look like an affliction. They both work, and they could both win Globes. I’m waiting for that photo op.

The AFI screened “Hitchcock” last week in Los Angeles, where the guests included our old pal Robert Forster, the hardest working actor in Hollywood. Our LEAH SYDNEY was there, and spoke to Gervasi, who had just delivered his final print in time for the show.

“We actually just finished the film 20 minutes ago,” Gervais quipped to the crowd.  Referring to editor Pamela Martin, he added, “Can we still take notes Pam? If the film seems a little wet, it is.”

Will “Hitchcock” be Fox Searchlight’s this year’s “Crazy Heart”– a sleeper in many categories? Maybe. I do think Mirren gives Jennifer Lawrence (“Silver Linings Playbook”) the most serious competition so far for Best Actress.