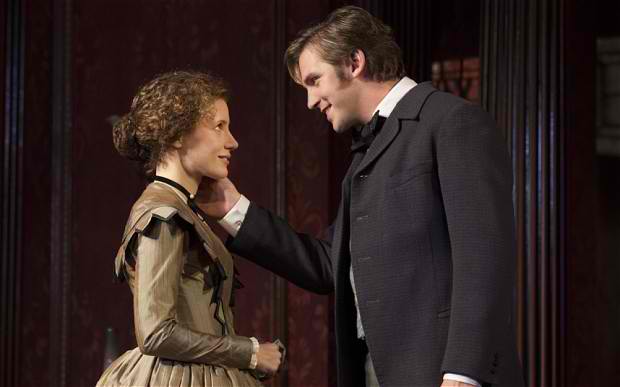 Broadway: the show must go on, and it did last night when “The Heiress” opened on Broadway with up and coming movie star Jessica Chastain, veteran actor and former Oscar nominee David Straithairn, and “Downton Abbey” star Dan Stevens.

Not easy to open a Broadway play under the current conditions. Most of the night was spent listening to everyone’s sagas of relocation. But you know, this–like Bette Midler’s Hulaween fundraiser–can’t be cancelled. And that’s what keeps New York going in tough times.

The play is adapted from its 1940s presentation, as it was adapted from Henry James’s novella “Washington Square.” The play was last revived in 1995 to great acclaim with Cherry Jones. Alas, the reviews are mixed this morning and I can’t say they’re wrong. Something went awry here. There’s a lot to see but the first act is uncomfortable to say the least.

The cast seemed to know afterwards at the Edison Ballroom, too. It’s kind to say Straithairn was brusque. I caught a cold from the stiff wind that he left behind after exiting the press room. Dan Stevens’ publicist, a young British woman who Maggie Smith would have kicked out of Downton Abbey, broke a time-speed record for yanking her client away from me when I asked what his future was on the Brit soap. “New season starts January 6th!” they yelled in unison, scampering away.

Jessica Chastain, a beauty and a nice, nice girl, came in very late, after just about everyone else from the play had moved on. Juilliard trained, Chastain took a big risk debuting on Broadway and carrying a whole play. Her Catherine starts out shaky but Chastain hits her stride in the second act. She looked overwhelmed when she finally arrived and told me the magnificent turn of the century inspired Albert Wolsky gowns were indeed very heavy. She’ll probably lose a lot of weight during the run.

Much more relaxed and really with it: Judith Ivey, who takes the role of Catherine’s aunt and kind of steals the show. She is really a pleasure, on and off the stage. Straithairn also does a great job as Catherine’s snobby, hyper critical father. But you know, I don’t think he cares what anyone thinks. And it works for him!

In the audience: Joel Coen and Frances McDormand, who also went to the party, believe it or not. Anthony LaPaglia and wife actress Gia Carrere– bright lights on a difficult night– caught the play but had to get home to relieve a babysitter. Also: producers Roy Furman and Paula Wagner, two friendly faces.

Don’t miss “The Heiress” especially for Derek McLane’s as usual stunning set–his Washington Square townhouse is a fantasy since NYU has pretty much destroyed the history that Henry James has preserved here. Director Moises Kaufman next heads to the Brooklyn Academy of Music for a restaging of “The Laramie Project.”

PS Broadway is on. So is entertainment all over the city. Our pal Tamara Tunie is at Feinstein’s at the Regency tonight and tomorrow night. I can’t think of a better way to get our minds off Sandy, and the election!