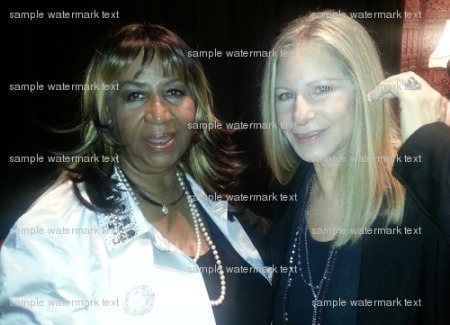 The Peter Jay Sharp theater in the Juilliard School of Music holds 900 people, and every seat was taken tonight at 7:30pm for an all star tribute to the late composer Marvin Hamlisch.. Hamlisch’s widow, the amazing Terre, organized a superstar send off for her popular husband, headlined by Barbra Streisand, Liza Minnelli and Aretha Franklin. She included many songs from “A Chorus Line,” as well as bits of scores from movies like “Sophie’s Choice” and and the upcoming Broadway musical version of “The Nutty Professor.” Brilliant young pianist Lang Lang played a piece that Hamlisch used as his audition to get into Juilliard when he was just 7 years old

So not to be outdone, the stage produced some incredible performances from Minnelli, Streisand, and Aretha Franklin–the latter not only sang a rewritten version of Carly Simon’s “Nobody Does it Better,” but then added a  gospel  number, “Deep River,” that gave the 90 minute show unexpected gravitas. It was one showstopper among many.

Backstage, Franklin and Streisand–maybe the two greatest living female pop singers–had a rare meeting and posed for a photo. You can see it here on this page. Streisand flew in from L.A. Franklin came by her luxury tour bus from Detroit.

Chris Botti played “What I Did for Love” on trumpet. Brian D’Arcy James sang “At the Fountain” from “The Sweet Smell of Success” with swagger. British star Maria Friedman re-created “Nothing” from “A Chorus Line,” while Dena DiGiacinto, Emily Fletcher, and Hollie Howard took on “At the Ballet.” There were classical music showcases, too: Carter Brey played the theme from “Sophie’s Choice” on cello; Itzhak Perlman regaled us on violin with “I Cannot Hear the City”; Lang Lang played the overture from “A Chorus Line.”

Minnelli’s number was a wittily re-worked “If You Really Knew Me” from “They’re Playing Our Song.” with Michael Feinstein on piano. She said, “I met Marvin when I was 14 and a half and he was 15 and three quarters.” They became fast friends, “joined at the hip.” She added: “He was one of my few constants in my life.”

Streisand closed the show with a sublime medley of “The Way We Were” and “Through the Eyes of Love.” She said, before she sat on a stool and held altered lyrics to the second song: “We met in 1963. Marvin got coffee for everyone, but I didn’t drink coffee, so he got me a chocolate donut. Actually, he’d get me two and our love affair began.” Streisand’s vocals were like buttah, in case you’re wondering still about getting tickets to her upcoming shows.”

And that was it. No one spoke except Terre Blair Hamlisch, who’s turned out to be uniquely eloquent in the face of her tragedy. Otherwise, it just music, music music–the finest performers assembled in one place for a historic event that no one will ever forget.