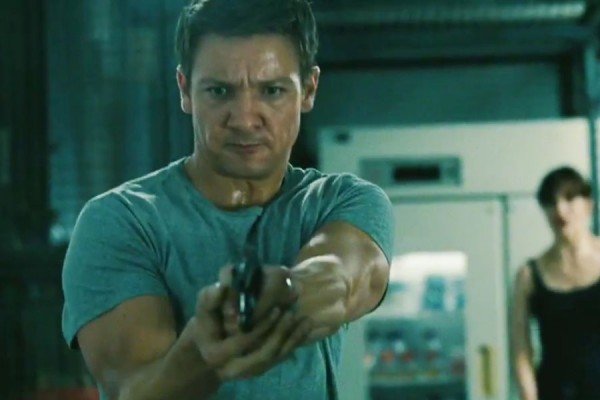 Jeremy Renner was already being set up as the new Tom Cruise in this summer’s “Mission Impossible 4.” His role in Tony Gilroy’s “The Bourne Legacy” puts him over the top. I owe Gilroy a good review after not really liking (or understanding) “Duplicity.”

So here it is: the director of “Michael Clayton” pulls off a most difficult trick here.

After writing three “Bourne” movies for Matt Damon, Gilroy steps in as director. He doesn’t do a sequel but a sidestep into a different character. (There’s mention that Bourne is missing, so Damon can return one day.) Renner plays Aaron Cross, an agent who needs top secret medication and the services of a doctor (played with a lot of verve by Rachel Weisz). Gilroy stuffs the film with brainy actors, from Renner and Weisz to Oscar Isaac, Edward Norton, Donna Murphy, Dennis Boutsikaris, Stacy Keach, Corey Stoll, and so on.

The actors are great but they’re lucky too because Gilroy and his screenwriter brother Dan (husband also of actress Rene Russo–who’s taken a couple of years off and looks terrific) have fashioned a smart script that gives enough character development so when the action starts, you get it. This movie features a wild motorcycle-car-motorcycle chase, too, a real thriller of a popcorn pleaser. With Renner running over tenuous roofs in a Manila ghetto, you get the Cruise inference loud and clear.

Universal will have a nice hit with “Bourne Legacy,” perfect for the dog days of August. And they know it. The studio threw a lavish premiere at the Four Seasons, so packed in the Pool Room that you wanted to jump in. Most of Universal’s big execs were, as well as most of the cast. Weisz brought along second husband Daniel Craig, who proved to be cranky and rude while she was her usual gracious self. Some other guests included Demi Moore, charming as always and returning home to the west coast after shooting Naomi Foner’s  “Very Good Girls” here.

Also: directors Joel Coen and Bennett Miller, who talked for the first time. Big news from Joel: the Coen Brothers’ “Inside Llewyn Davis” will probably debut at the Berlin Film Festival in February 2013. It will not make the Oscar deadline. It doesn’t have a distributor, Coen says they’re just cutting it now. Too bad. A Coen Brothers movie would have made this year’s awards race very interesting.

Anyway: seeing Jeremy Renner make the leap to movie star is very gratifying. He’s a good guy, a great actor with lots of range and an unlimited future. And unlike some others who started that way, I don’t think he’ll change for the worse. And Tony Gilroy: mazel tov.