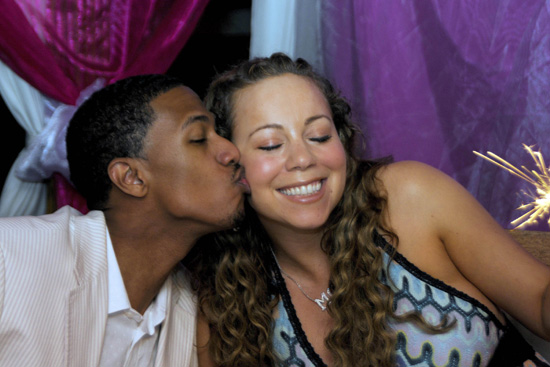 Exclusive: Well, I wrote this more than a week ago, but I’ll tell you again. Randy Jackson, the original “American Idol” judge, manages Mariah Carey. He’s also producing her new album. On Tuesday this past week, Randy flew out to the Hamptons by helicopter from New York to see Mariah for a couple of hours. He was in the city promoting his new line of watches for HSN, which debuted last night.

Randy is bringing Mariah to “Idol” to join him as a judge. It’s the perfect situation. They can finish their album, and Mariah can settle in for a couple of years, hopefully, as her twins are in their formative years. “Idol” will keep her close to home. Plus, when said allbum is released, it will give her an automatic platform from which to  launch and promote it.

Now here’s the newest news: The first single from the album, I am told, is a song called “Triumphant.” When all the “Idol” contracts are signed, and the deal is finalized, both Randy and Mariah will be exactly that–Triumphant. And “American Idol” will be a fun show to watch again. Unlike Jennifer Lopez, Mariah can sing, sing, sing. No doubt we’ll hear a lot of warbling from the judges’ table.

Now we’ll have two members of the same family on competing reality-singing shows because Nick Cannon, Mariah’s hubby, host “America’s Got Talent.” The Carey-Cannons have talent, too!