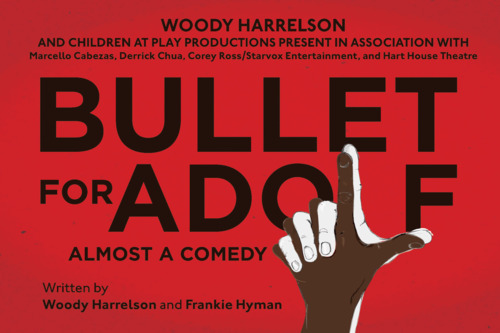 Woody Harrelson and his buddy Frankie Hyman have written their first off Broadway play. The comedy, called “Bullet for Adolf,” will open at New World Stages next month with Woody directing. It’s billed as an American premiere. Performances start July 19th and last 8 weeks.

New York, NY – Bullet for Adolf, a new comedy by Woody Harrelson and Frankie Hyman, will receive its American premiere this summer, it was announced today.  Directed by Mr. Harrelson (Academy Award® nominee – The Messenger, The People vs. Larry Flynt), performances will begin Thursday, July 19, 2012 at New World Stages (340 West 50th Street), with an official Opening Night set for Wednesday, August 8, 2012. The production is scheduled to play through Sunday, September 9, 2012.

During the summer of 1983, in the sweltering heat of Houston, an unlikely friendship is formed when a couple of mid-western rubes with uncertain futures meet up with a slick New Yorker on the run from his past. The disappearance of a WWII artifact sets off a chain of events that proves that nothing changes the present like a blast from the past.  The characters that populate this hysterical, rapid-fire new comedy by real-life friends Woody Harrelson and Frankie Hyman are based on real people, though the events depicted are fiction and the names have been changed to protect the not-so-innocent.

“Frankie and I worked construction together in Houston in the summer of 1983,” Harrelson explained. “The people we got to know that summer had a profound effect on us and we knew we had to write a play about them. The only problem was our real lives didn’t have much of a plot, so we started embellishing.  Now it’s about seven-percent history and ninety-three-percent embroidery.”

Woody Harrelson (Playwright/Director) first discovered his love of theatre while performing in high school.  His dedication continued through college where he appeared in 26 plays before moving to New York and landing an understudy role in Neil Simon’s Biloxi Blues.  Theatre has since remained a passion throughout his career.  He starred in the Roundabout’s Broadway revival of The Rainmaker, Sam Shepherd’s The Late Henry Moss, Tennessee Williams’ Night of the Iguana and John Kolvenbach’s On An Average Day.   He directed the Toronto premiere of Kenneth Lonergan’s This Is Our Youth and most recently directed the debut staging of Bullet for Adolf at Hart House Theatre in Toronto, a play he co-wrote with Frankie Hyman. In addition to his work in theatre, Harrelson is an accomplished actor in both film and television.   He received Academy Award nominations for The Messenger and The People vs. Larry Flynt. Upcoming films include Martin McDonagh’s Seven Psychopaths, Now You See Me for director Louis Leterrier and Scott Cooper’s Out of the Furnace.  Other film highlights are The Hunger Games, Game Change, Rampart, Zombieland, No Country for Old Men, Defendor, Transsiberian, Kingpin, Natural Born Killers, Indecent Proposal, and White Men Can’t Jump.  Harrelson’s television credits include his Emmy Award winning performance on “Cheers” and guest appearances on “Frasier” and “Will and Grace.”

Frankie Hyman (Playwright) was born and raised in Harlem, New York.  He left New York briefly in the early 1980’s to work construction in Houston, Texas where he met and became friends with Woody Harrelson.  After returning to New York, Hyman found a new interest in writing.  It wasn’t until the early 1990’s that he again connected with Harrelson.  Soon after, Hyman moved to Los Angeles where he has been pursuing a career in writing.  Hyman and Harrelson debuted their play Bullet for Adolf in May 2011 at Hart House theatre in Toronto.