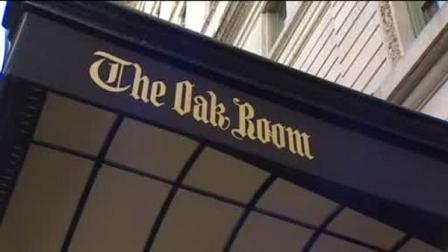 No said it yesterday, but the culprit in the death of the Oak Room at the Algonquin Hotel is Marriott. The hotel chain took over the legendary New York hotel a  few months ago and imnmediately announced a six month shut down for renovations. Their first act: replace the vaunted Oak Room — home to cabaret singers for 30 years — with a breakfast lounge. (Anyone who’s ever stayed in a Courtyard by Marriott can tell you about their legendary cold egg buffet.) This won’t be Marriott’s only change, I fear. The main lobby and dining room — with the legendary “round table” that used to seat Dorothy Parker and Robert Benchley–will no doubt be replaced by vending machines and plastic orange chairs.

The fact is, the end of gracious New York life has been over for some time. Down here in Greenwich Village, we’ve long ago lost the famous Balducci’s and Jefferson Market. The great communal gathering place diner, Joe Jr.’s, has been gone for two years. The 40 year old Bagel Buffet was replaced by Dunkin Donuts. New York University–an institution I am embarrassed to say I matriculated from–has already swallowed huge chunks of the fabled village. Now unless they’re stopped they threaten to continue–by building massive, height defying structures in a neighborhood where the sky has always been unobstructed. Am I fatalistic? NYU gets what it wants.

We have no hospital on the lower West Side of New York since the closing of the lamentable St. Vincent’s Hospital. From 59th St. to the Battery, there is nothing. St. Vincent’s is shuttered and being replaced by hundreds of high priced condos. On the application, you must promise not to ever fall ill, because the chances of getting across town to Beth Israel Hospital on the east side, in traffic, are sketchy at best. (Maybe the really rich keep home hospital set ups, like Michael Jackson. Propofol is an option, along with granite counter tops.)

New York used to be full of book stores and record stores. They are almost completely gone. The writers and musicians and artists gatherered at Elaine’s (gone — sold by its inheritor for over $8 million to a redeveloper). The famed Cedar Tavern on University Place, an iconic little building that looked like a log cabin–is now an anonymous brick apartment house. The bottom level, where the Cedar once proudly stood, is a vacant ‘for rent’ cold white box. Whoever winds up selling $300 sweaters in there will never know about the beautifully carved bar, and the famous artists like Larry Rivers and Robert Rauschenberg who crowded the tables.

Depressing, no? Behind me on 9th St., where the Village restaurant was always noisy fun, a security guard is stationed in front of the miserable Lion restaurant quizzing entrants for their acceptability. (It’s hilarious.) The Waverly Inn is still buzzing socially, all by itself. But landlords in the West Village and right over here are advertising “Lower level available”–attempting to turn their mice-ridden storage spaces into “speak – easies” from the 1920s– i.e. “fake hip.” There are no real hip restaurants anymore–from Moomba to 150 Wooster to One Fifth Avenue–the ghosts dance til four while the city that never sleeps is full of shoe stores and outpost banks.

Did I mention banks? There’s no money. People are out of work. And yet there are banks everywhere with dozens of ATM machines. They are giant, coldly lit, empty places. We’re getting one right here at my corner–a First Republic. They’ve bought the old Ansonia Pharmacy building and are gutting it–literally scooping it out from top to the very bottom. The old apartments over the Ansonia will now be luxury homes. On a block of Sixth Avenue where small businesses have always thrived, there will now be a white glowing edifice with a huge vault in the basement and 24 hour access to money no one has. Maybe Marriott and NYU can set up a breakfast lounge in the lobby. With a defibrillator.

There’s more: Eighth Street and Bleecker Street have been destroyed. On the latter, it’s all charmless Marc Jacobs and Ralph Lauren. And I’m not even getting into the horrors facing the folks on Second Avenue every day with the endless subway dig. Or the fact that Broadway south of Houston Street to Canal is now basically a sidewalk with one lane of traffic flow. Or the unnecessary move of the Washington Square Park fountain so it lined up with the Arch. For more read http://vanishingnewyork.blogspot.com/

PS One happy announcement: after 18 months, the Jefferson Market Library clocktower is back in service. The bell rings on the hour. It’s the most beautiful sound in lower New York.