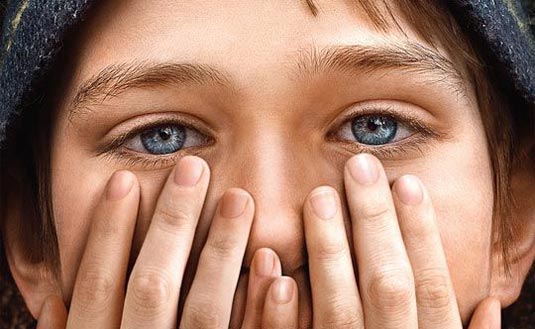 It was the penultimate movie premiere of the fall Oscar season– Stephen Daldry’s “Extremely Loud and Incredibly Close.” Or is it “Extemely Close and Incredibly Loud”? No one can remember. This is what we know: it’s Extremely Late and Incredibly Tearful. The movie is based on Jonathan Safran Foer‘s novel about a 10 year old boy whose father dies in the World Trade Center. That’s Tom Hanks. The mom is Sandra Bullock. The mysterious grandfather is Max von Sydow, who is so good he should be nominated for an Oscar. It will take members of the Academy to save him.

Along the way the boy–who was found on “Jeopardy!”–meets Viola Davis and Geoffrey Wright, among others. He walks from the Upper West Side to Fort Greene, Brooklyn. You either find it preposterous or very moving. Or both.

At the premiere at the Ziegfeld, all the stars and the director arrived. Everyone had to pass through massive metal detectors even though this film is not the biggest of the year and probably no one wants to pirate it. There were no metal detectors at the premieres of “War Horse” or even “The Girl with the Dragon Tattoo.” This is called ‘overkill.’ There were dozens of very serious security people eying the guests as if they were recent residents of Rikers Island. It was kind of funny.

All the stars bunched up near the little green room just beyond the inside theater doors. Tom Hanks and Rita Wilson were briefly separated. “Where’s Tom?” Rita asked, nervously. She told me her album is coming on May 6th from Decca Records. She’s a good singer. Tom Hanks, stuck in this little passageway, said, “I want to keep everyone incredibly close.” I told him I’d seen the movie last week, and that he was very affecting in it. (He is.) He said, “Tell me, is at as good as, say, “New Year’s Eve”? He’s very funny. “New Year’s Eve” got the lowest score of the year just about, on Rotten Tomatoes.

Viola Davis came along. She’s been nominated by every award group this week for “The Help.” She’s also in this movie. She greeted Sandra Bullock. They immediately started talking about their adopted toddlers. They’re all very happy, which is nice. Gabourey Sidibe wandered through, and said hi to everyone. It was like an Oscar reunion.

Then came Stephen Daldry. He kisses everyone. He’s light as a breeze. Each of his movies has gotten lots of Oscar nominations, but this one has been late late late out of the gate. Can it overcome the obstacle? I think so. But the Hollywood Foreign Press didn’t like it–it was too much a “New York” movie. Inside the theater, Daldry spoke, and introduced lots of people from Tuesday’s Child, a 9-11 group. He also gave a shout out to the McGinly family, who participated in the film. They lost their son and brother Mark, who was 26, in the World Trade Center.

And so: I think there was an after party. I wasn’t invited (no press was, or little press, as producer Scott Rudin likes to keep it all a little hostile just to keep us awake). Instead I went to see “Lysistrata Jones” on Broadway. It is totally atrocious. I can’t even write a whole item about it. It started in a gym downtown, and it should have stayed there. No one wants to be hard on a new musical, but really. There are limits.

As I left the Ziegfeld, I had to go through the metal detectors. To get out. Of course, now I set them off. The alarms rang. The paramilitary crew hanging around the lobby looked worried. Who do you have to know to get out of this place?

Go see “Extremely/Incredibly.” It’s a good drama. Warner Bros. took a gamble on it, and it paid off. And it’s better than “New Year’s Eve.”