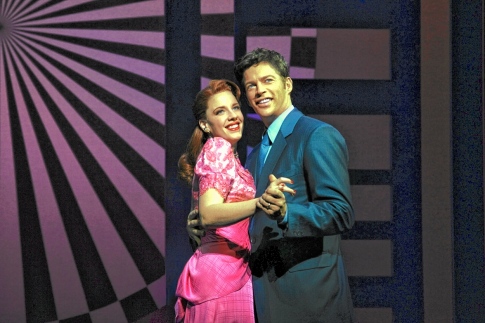 “On A Clear Day You Can See Forever” only a ran a few months when it first opened on Broadway in 1965. It’s never been revived, and for good reason. Now, some misguided people have exhumed it, rewritten it to absurdity, and stuffed it like an owl on the mantelpiece. The show, with one memorable song–the title–is all about reincarnation. So director Michael Mayer and “choreographer” Joann Hunt have brought “On a Clear Day” back in the form of torture. It’s not just that all of it is quite awful, but that it looks so freakin’ cheap. The stage rarely looks like anything more than a test pattern (fail). The New York Times says it cost eight million dollars. Most of the money must have gone to Prozac prescriptions.

Luckily, star Harry Connick Jr. will emerge from this unscathed. That’s because he doesn’t seem to have much invested in it anyway. He just of oversees the catastrophe while trying not to get his hands dirty. (Wait! How can a show cost eight  million dollars when the star never has one costume change and just wears the same blue business suit for two and a half interminable hours?)

Peter Parnell is the main culprit here. He’s taken Alan Jay Lerner‘s book (the show has music by the late great Burton Lane), such as it was, and reconceived it with Michael Mayer as some kind of gay parable.  Now Dr. Mark Bruckner takes on a patient he describes stuffily to the audience as a “homosexual.” He then puts David (formerly Daisy in the original musical and movie–the latter played by Barbra Streisand) under hypnosis and falls in love with a long ago circa 1940s diva hidden in David’s psyche. So Dr. Mark is — in 2011, even though this is set in 1974–putting a patient under, and then sort of wooing and molesting the patient’s inner psyche or possible multiple personality. And singing about it. Of course, David’s confused. Isn’t hunky Dr. Mark straight? Who knows, really and who cares?

But oy my god–even though show now takes place in 1974 instead of 1965, Parnell has added several “inside” jokes that reference Streisand and “Funny Girl.” He also includes an inside joke about “Pippin.” (It was too inside for me.) He leaves in –or perhaps adds–a joke about Truman Capote that no one gets.

The main thing is that now, with all the roles inside out, Harry Connick Jr. gets to sing the theme song at the end of the show. Luckily, since the song was written for a woman, Broadway newcomer Jessie Muehler arrives and cleans up the mess of the show. Muehler has the most unforgiving task of the cast: to not copy Stresiand while looking and sounding like Liza Minnelli (whose father, Vincent, directed the Streisand movie). Producers of another show should give her a second chance. She has got great potential.

Oh well: Connick’s charm and star appeal seemed to be enough on Saturday night to cover up the show’s many deficiencies. And there is always the score. But why oh why did Connick pull out of next spring’s “Nice Work If You Can Get It” in favor of this? It’s a mystery.

PS Will all the bad reviews kill “On a Clear Day”? Probably not. Coming right behind it is “Bonnie and Clyde” from the insufferable Frank Wildhorn. The long knives are being sharpened for that one.