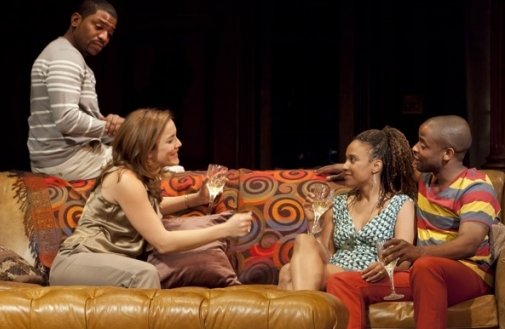 I’m completely appalled by the glee the New York Post’s theater columnist takes in reporting how badly some shows are doing on Broadway. Enough with the negativity. There are so many terrific plays this season. And two of them, both directed by Kenny Leon, are by African American playwrights with almost all black actors. One, of course, is “The Mountaintop” with Samuel L. Jackson and Angela Bassett.

“Stick Fly,” of course, attracted an A list crowd for its premiere, from Condola’s parents to Spike Lee and wife Tonya Lee Lewis, Taraji P. Henson, Malik Yoba, Gayle King. LaTanya Richardson (wife of Samuel L.), Alicia Keys with Swizz Beatz and her mom Terria (Alicia composed incidental music for the play and put her name on the marquee to help sell tickets) and so on.

So we have two original plays on Broadway written by young African American women. This nothing short of amazing and wonderful. And while the plays are not yet at the level of August Wilson or Eugene O’Neill, they are just fine, very entertaining, and extremely worthy of being seen. “The Mountaintop” has big stars. “Stick Fly” boasts five sensational actors all of whom bear seeing. Of course, Ruben Santiago Hudson is a James Earl Jones in the making by now. He’s quirky and and poignant as Dr. LeVay, father of a well to do black clan who’ve gathered on Martha’s Vineyard for a summer weekend of revelations. I’m already a huge fan of Tracie Thoms and Mekhi Phifer. Dule Hill comes from the show “Psych.” He and Phifer have great rapport as brothers, sons of Dr. LeVay. And Rosie Benton is surprisingly snappy as the white girl who’s wandered into the LeVay’s many dysfunctions.

But watch out for Condola Rashad. She’s yet another second generation actress on Broadway right now–just down the street from Lily Rabe in “Seminar”–who’s going to wow crowds. But go see these two plays this holiday season–and prove the negative tonguelashers wrong.