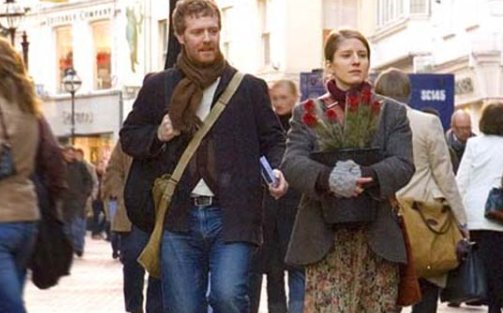 “Once”–do you remember this fine indie film from 2006? It went on to win the Academy Award for Best Song (“Falling Slowly”). The movie won the Indie Spirit Award for Best Foreign Film. (You know it was good because the Golden Globes ignored it.) Glen Hansard and Marketa Irglova, wrote the songs and starred in the film as an aspiring Dublin songwriter and a young Czech mother who meet, collaborate and fall in love. Now “Once” debuts on Tuesday night at New York Theater Workshop, the same place that once launched “Rent.” Watch on Wednesday morning, I am not kidding: the show’s stars, Steve Kazee and Cristin Milioti, are about to become overnight sensations. The musical, directed by John Tiffany, is a gem. Every part of it–from the actors and musicians to the tremendous set by Bob Crowley to the lighting, staging — all of it is simply sensation. In particular, Steve Kazee, who’s been in a few Broadway musicals, is on his way to big things.

Now the plan is to move “Once” to Broadway next spring in time for the Tony Awards. There are few new musicals coming, and “Once” will be the odds on Tony favorite. The question facing its creators is how to retain the intimacy of the New York Theater Workshop. Right now, they have a magical piece of theater with one set. So the goal will be to enlarge it but not too much. This is tricky.

Of course, “Once” really relies on the performances of its leads. Milioti is so appealing and cute, spunky even, as Girl. (The leads are just Guy and Girl.) She couldn’t be more winning. But Kazee is a standout. The show really makes him into a rock star. And what’s so overwhelming is that the actor, who comes from Kentucky in real life, has perfect his Irish accent. He reminded me of the great Irish singer songwriter Luka Bloom and was extremely authentic. 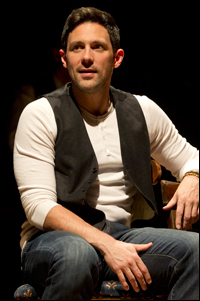 “Once” is also aided by its supporting cast of 10, all of whom are required to play instruments and to dance, to some degree. This is quite extraordinary, a la John Doyle‘s stagings of “Sweeney Todd” and “Company.” Bravo to all of them. While Tiffany’s direction is unique and elegant, some kudos must go to Steven Hoggett, who gets a credit for “Movement.” I guess that’s just a shade shy of choreography. But this ensemble does “move” almost like a ballet company. They are just terrific.

Hansard and Irglova’s characters and music from the movie remain intact, and beautifully reproduced. “Falling Slowly” is still the centerpiece number, but several of the other songs emerge here on their own including “When Your Mind’s Made Up” and “Say It to Me Now.”

When you think of all the bloated, overly expensive shows that have forced their way onto Broadway recently (hello “Bonnie and Clyde”), “Once”–like its movie– remains a refreshing, simple, elegant breath of fresh air.