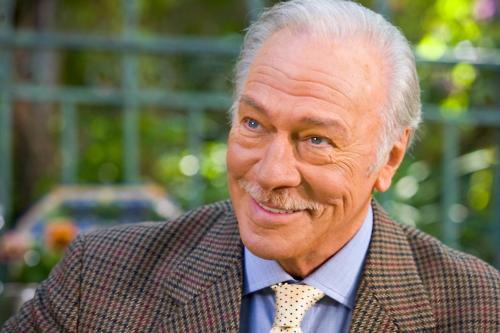 Could Christopher Plummer, known to decades of moviegoers as Captain von Trapp from “The Sound of Music,” finally win an Oscar? Could be. Plummer has a lot of buzz from his role as the dying, gay dad in Mike Mills‘s excellent film, “Beginners.” Last night “Beginners” Terrence Malick’s “Tree of Life” tied for Best Feature at the Gotham Awards, the east coast cousin of the Indie Spirit Awards.

Plummer was his usual charming self. He reminded the audience that “Beginners” star Ewan MacGregor wasn’t present because he was working.  “And I hate him,” Plummer added quickly, and perfectly. Mike Mills, whose only other movie is the terrific “Thumbsucker,” accepted the film’s award and looked a little surprised. Of course, everyone thought Alexander Payne’s “The Descendants” was set to win. There are still some surprises left in awards shows apparently.

Plummer would be in a mix for the tight Supporting Actors’ race with Corey Stoll from “Midnight in Paris,” Kenneth Branagh from “My Week with Marilyn,” Uggie the Dog from “The Artist,” and maybe Albert Brooks from “Drive,” Armie Hammer from “J Edgar,” and Jeremy Irvine from “War Horse.” Plummer should have won for playing Mike Wallace in “The Insider” and probably many other times. There’s obviously a lot of effort going to into getting the nomination. Climb every mountain!

Meantime, the downtown Cipriani was really packed to the gills. Charlize Theron, Gary Oldman, director David Cronenberg and film exec Tom Rothman all got tribute awards. Charlize was particularly cute with her “Young Adult” co-star Patton Oswalt. I ran into Josh Radnor, from “How I Met Your Mother,” who seemed to have come with actress Lake Bell. I asked him if anyone knows who the mother actually is. “Nope,” he said. “They haven’t told me.” Radnor is waiting to hear if his second feature that he directed, “Liberal Arts,” has gotten into Sundance. His co-star this time is Lizzie Olsen, one of the current “it” actors.

At my table I talked to Kim Wayans, the actress and comedian who’s in “Pariah.” She’s also famous for acting with her brothers in “In Living Color” some twenty years ago. We reminisced about her hilarious sendups of Oprah and of Whitney Houston. I also reminded her of the time her parents got up and walked out of the premiere  “Scary Movie”–directed by her brother Keenan Ivory Wayans. “They didn’t like that one,” Kim said, shaking her head. “And they’ve seen a lot.” Now Kim has shot a half hour comedy pilot in which she plays the elder Mrs. Wayans trying to raise all those rowdy would be comics. What goes round comes round.

Also at the Gothams: Robert Forster, Mary Page Keller and Matthew Lillard from “The Descendants,” Felicity Jones, who won for “Like Crazy,” and Melissa Leo, who’s calmed down since winning the Oscar. Did winning do anything for her? “It just helped me in here,” she said, pointing to her heart. When you’re a certain age, you know what that means.