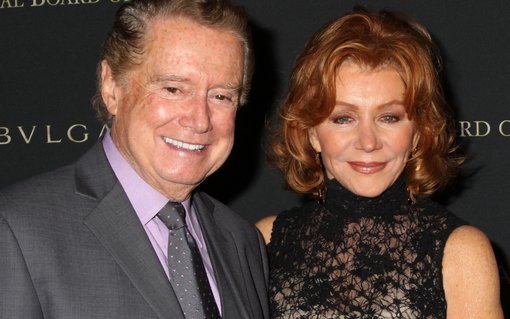 After two days of the idiotic Kardashians, Justin Bieber’s weird faux-pregnancy problem and god knows what else, it was nice to spend some time with people of actual accomplishment last night. Regis Philbin and Angela Lansbury were two of the six people who were named Living Landmarks by the Landmarks Conservancy at a swanky black tie dinner at the Plaza Hotel in the ballroom. Peter Duchin and his swinging orchestra were on the stage, there was filet mignon on the plate, and my table was hosted by Liz Smith, who also hosted the evening. What could be nicer?

Regis and Joy Philbin, Michael and Laurie Gelman, and Art Moore were seated next to us, Angela Lansbury and her brother Edgar were nearby. Katie Couric, dressed in a an off the shoulder gown and looking like a million bucks, presented Regis with his award. She was pretty funny, but Regis ‘got’ her with a poem he read about Katie and had the place in stitches. Famed film and theater critic Rex Reed toasted Lansbury, restaurateur Danny Meyer (Gramercy Park Tavern, Union Square Cafe, Shake Shack) brought the median age down to about 70. (Danny’s, like, 50.) I had a long, fascinating talk with archeologist Iris Love. I chatted with the great veteran journalist Garrick Utley, who made his name at NBC News, and Joni Evans, famed editor/publisher/agent updated me on her all -star web site, www.wowowow.com. Legendary Le Cirque impresario Sirio Maccione told us all about his new restaurant in New Delhi.

The other honorees were extremely notable: former Mayor David Dinkins, philanthropist Lewis Cullman, and his new wife, Louise Kerz Hirschfeld, widow of famed caricaturist Al Hirschfeld. (Yes, these two “older” people just got married–why be lonely? Their respective spouses are gone, and they met and fell in love. So cool.)

Liz Smith is 88 years young. She came out in a cowboy hat and performed a singing opening number to a Sondheim tune with new lyrics. The audience roared. She also mentioned that she was named in Rex Reed’s parents’ divorce. (That must be some story. They’re all from Texas.) Lansbury noted that no matter how many Tony Awards she’s won or will win, her obit will always start with “Murder She Wrote.”

But it was Regis–my favorite all time celebrity–who really put on a show. First, he asked Katie when she was starting at ABC. (She’s already started. And she’s doing a “20/20” special on Reege on November 17th.)

Here’s Regis’s poem to Katie: “I know now what it’s like be under the Katie Couric curse/Like when she crashed, or trashed, Trump’s wedding with a camera in her purse/She’s smart as a whip and beautiful as can be/But I’m starting to think she wants to be ME!/You may not know that she once served Pizza Hut pies/Learned to handle cheese like Matt, and Al, and all the rest of those Today show guys/With politicians and presidents she certainly hob nobbed/But why oh why I ask you ladies and gentlemen, can’t she keep a job?”

The last line stopped the show with peals of laughter Katie turned red, but was a sport. She’d made a joke about Regis being cheap. Now he was getting her back.

“With their new gal, ABC better hold on tight/God only knows she can put up a hell of a fight/I hear there’s a job open and I really hate to admit/Live with Katie and Kelly has a nice ring to it.”