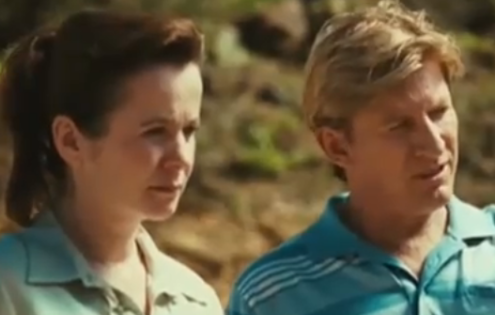 “The Artist” won the the Hamptons International Film Festival’s Audience Award on Sunday night. The silent, black and white film has already been the talk of Cannes, has picked up a prize in Chicago, and was the audience award winner at the Toronto Film Festival. As well. Jean DuJardin won Best Actor in Cannes. It doesn’t open until November 23rd, but “The Artist” is picking up steam as the best movie Harvey Weinstein‘s bought outright in a while. While there’s plenty of Oscar talk, “The Artist” remains an underdog this far out from the early prizes in December and actual nominations in January.

Big movies, with lots of dialogue, from “War Horse” to “J. Edgar” to “Moneyball,” “Drive,” “The Iron Lady,” “Ides of March,” “Midnight in Paris,” “Extremely Loud and Incredibly Close,” “Hugo,” “My Week with Marilyn,” and “Young Adult” have all kinds of leverage on inside tracks. But “The Artist” does seem to win over audiences wherever it plays…

…Plenty of films from other festivals played in the Hamptons, but Jim Loach’s “Oranges and Sunshine” made its debut there for Cohen Media. The newish company, founded by “Frozen River” producer and real estate magnate Charles Cohen, has already had a Best Foreign Film Oscar nominee earlier this year with “Outside the Law.” There’s more to come shortly, including the current “Chasing Madoff” documentary and the French feature “My Afternoons with Marguerite.”

“Oranges and Sunshine” opens next Friday and then fans out across the country. Past Oscar nominee Emily Watson plays real life British social worked Margaret Humphreys, who stumbled upon one of England’s great scandals a few years ago. She discovered that over 10,000 hildren had been illegally deported from the UK to Australia between 1947 and 1970. It was part of a government cover up that was aided by the monks of the Christian Brothers sect of the Catholic Church. Many of the children were left with the Brothers by parents who couldn’t take care of them, were tortured and abused, and then sent to Australia on ships. The children, none of whom were adopted, ended up living at a school outside of Perth called Bin Doon.

Humphreys, who came to the Hamptons Film Festival with her husband (a social worker who also went into the project full time), changed her life’s work. She’s spent the last 25 years reuniting families around the world. It’s an extraordinary story.

Humphreys found many of the parents had migrated to America over time, so there’s a U.S. tie in too as mothers and children meet for the first time. The title of the film comes from how the orphanages and church leaders pitched sunny, warm Australia to the British kids– as a place with “oranges and sunshine”–compared to rainy, cold Britain.

This is Jim Loach‘s first feature film after a successful career directing TV in London. He has the provenance, though: his father is acclaimed British filmmaker Ken Loach. He told me over the weekend that he’d waited to direct his first feature. He wanted to find the right material. When a friend told him Humphreys’ story, he knew he had it. “Lord of the Rings” actors Hugo Weaving and David Wenham co-star with Watson, who gives a beautifully restrained, moving performance.