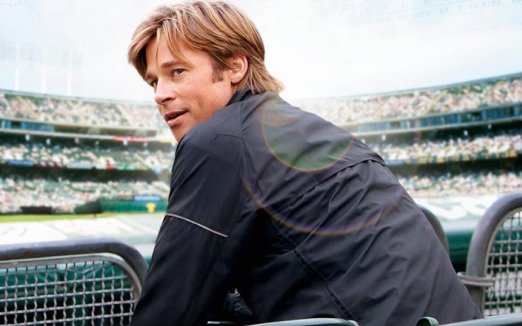 I wrote this on June 21, 2009. Time and patience have paid off for “Moneyball,” one of the best movies of 2011. Sony’s Amy Pascal gets the kudos for figuring this all out. And Soderbergh, replaced by Bennett Miller, went on to his own hit with “Contagion.”

Brad Pitt was supposed to start shooting a baseball movie tomorrow for Sony/Columbia called “Moneyball.” The director is Steven Soderbergh. The screenplay is from Steve Zaillian. The co-star is newly hot Demetri Martin.

For the moment, though “Moneyball” has been halted. The sets are built, everyone’s in place, but Sony chief Amy Pascal got cold feet at the last minute on Friday night. That’s her prerogative, of course. Sources tell me she was worried that the film’s script — as she read it — didn’t have enough emotional pull.

But insiders from “Moneyball” are hopeful Pascal will change her mind. They think she’s worried that Soderbergh is about to give her one of his minor films, like “The Girlfriend Experience” or “Full Frontal.”

“Not so,” says an insider. “It’s going to have the feel of ‘Erin Brockovich’ or ‘Out of Sight’ ” — Soderbergh’s two biggest commercial hits. “It’s got a major movie star who’s passionate about it. And it’s a come-from-behind, win-win movie.”

Indeed, “Moneyball” sounds intriguing. Soderbergh has already filmed interviews with real baseball players from the 2002 season who watched the Oakland Athletics start at zero and wind up winning their division with an astounding’103-59 record.

The story hinges on owner Billy Beane, whom Pitt is set to play when the filming begins. Beane began the season with no star players, just rookies and leftovers from other teams. As told in the book of the same name by Michael Lewis, Beane used something called sabremetrics to calculate his way to a division championship.
Pascal may have bridled at the fact that Soderbergh plans to use real team players from 2003 mixed in with actors to retell their own story. He’s also using those interviews as documentary interstitials to advance the story. Producers say this is like what Warren Beatty did in “Reds,” but not really. It’s very much in keeping with the way documentary filmmaking has been threaded into feature films in recent years.

“The vision Steven has is great,” says a source, “but it’s not all on the page. He was writing so fast, he didn’t have time to catch up to the production schedule. Amy didn’t see the vision. She may not know that the interviews are only 10% of the film. So much of it will be the magic of just filming the story.”

Baseball movies that work are usually about that magic — especially since you’re filming things that can’t be scripted. “Bull Durham,” “Field of Dreams,” “The Natural” all sort of depend on what happens on the field in order to make the film feel honest.

The “Moneyball” gang now has four options: make’a deal with a currently interested studio, make one with someone else, replace Soderbergh, or have Sony give them the go-ahead to steal home. They do say that former Athletic Scott Hatteberg, 39, who is set to play himself in the movie, will be the hot story when “Moneyball” is finished. Hatteberg is an unsigned free agent this year, and is ready for his close-up.

Don’t believe everything you read about the “Moneyball” budget, either. The total — $50 million — includes about $15 million to Pitt, and a chunk to Soderbergh. I’m told otherwise this a relatively inexpensive film to make. And what a coup for Columbia if they wind up with the “Rocky” of baseball movies starring Brad Pitt.

(Here’s an idea, PS: Why not put this under the Sony Pictures Classics rubric? It could be “Bend It Like Beckham” all over again?)